C&C and Bank of Ireland fall amid sterling weakness

PTSB down 0.9 per cent following ECB fine as Iseq declines for third time in four sessions 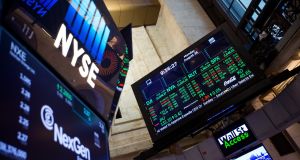 In the US, uncertainty about the impact of tropical storm Harvey pushed investors toward safe-haven assets. Photographer: Michael Nagle/Bloomberg

Sterling-sensitive stocks such as C&C, Total Produce and Bank of Ireland were out of sorts on Monday in Dublin as the UK currency continued its losing streak against the euro as a third round of Brexit talks resumed in Brussels.

The wider European markets was also out of sorts, with the benchmark Stoxx Europe 600 Index falling 0.5 per cent, as currency markets news dominated, with the euro holding steady at above $1.19 against the dollar, its strongest level since January 2015.

Dealers said trading activities were subdued on this side of the Atlantic as UK investors enjoyed a bank holiday.

The Iseq index lost 0.6 per cent to 6,603.14, marking its third decline in four sessions, as sterling extended its four-week slide compared with the euro, even as analysts at banks such as ING Groep and Nordea said that movement had been overdone and that parity between the currency pair was unlikely.

The euro was trading at 92.3p at the end of the European session on Monday, compared with a level of 76.6p just before the Brexit referendum last year.

CRH declined by 2.2 per cent to €29.02 as followers of the US building materials sector, where the Irish group derives much of its earnings, monitored the US weather map.

“The sector was under pressure late on Friday as Hurricane Harvey (it was later downgraded to a tropical storm) approached Texas. CRH’s exposure in southeastern Texas is small and it is concentrated in the group’s products businesses,” said Davy analysts on Monday. “Of cement producers, Martin Marietta, Buzzi, Cemex and HeidelbergCement are most directly exposed in the region.”

Permanent TSB closed 0.9 per cent lower at €1.83 as the European Central Bank fined the bank €2.5 million for breaches of liquidity rules.

Bucking the trend, property stocks were generally in demand, with Irish Residential Properties Reit adding 1.5 per cent, while Hibernia Reit gained 0.1 per cent.

Big exporting companies were out of demand as the euro strengthened against the dollar, with German carmakers BMW and Daimler falling 0.5 per cent and 0.3 per cent respectively, while French beauty products maker L’Oréal declined by 0.4 per cent.

Oil and gas firms were also weaker as investors assessed the impact of tropical storm Harvey. US crude futures fell as the refinery shutdowns could reduce demand for American crude. US crude was down 3.4 per cent at $46.26 around the time that European markets closed.

French oil giant Total lost 0.4 per cent. German chemical group SGL Carbon rose by 3.4 per cent as US investment bank JP Morgan raised its rating on the company to the equivalent of a ‘buy’ from ‘neutral’.

The Dow Jones Industrial Average and the S&P were unchanged in midday trading on Wall Street with losses in insurance and oil stocks offset by gains in shares of health and home-improvement retail chains as investors assessed the impact of tropical storm Harvey.

The uncertainty pushed investors toward safe-haven assets, with US treasuries holding steady ahead of the employment data on Friday, while gold rose to its highest in more than a week.

Home Depot and Lowe rose as investors expected the two largest US home-improvement chains to be among the biggest beneficiaries of post-Harvey recovery. Insurers Travelers, Allstate and Progressive dropped.

Kite Pharmaceuticals soared after Gilead Sciences agreed to buy the immunotherapy developer in a deal valued at $11.9 billion. – (Additional reporting by Bloomberg)