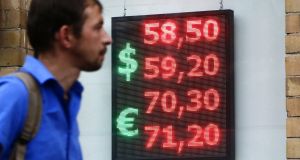 Exchange rate: the euro has jumped almost 13 per cent against the dollar this year. Photograph: Maxim Shipenkov/EPA

Foreign-exchange traders face an anxious wait to see if European Central Bank policymakers will on Thursday address a euro rally that has put the currency on track for its best year against the dollar.

An improving euro-zone economy and the prospect that the ECB will scale back a bond-buying plan first introduced in 2015, to ward off deflation, have catapulted the euro almost 13 per cent higher against the US currency so far this year.

Most economists expect Mario Draghi, the ECB president, and the rest of the governing council to delay announcing a timetable for cutting its monthly purchase of bonds when they gather this week. In April they trimmed it from €80 billion a month to €60 billion.

But traders and investors in the €4.3 trillion daily currency market will be intensely focused on whether officials voice any anxiety about an appreciation in the common currency that threatens the competitiveness of euro-zone exporters and exerts downward pressure on inflation.

Mr Draghi has to talk about the euro, said Thanos Vamvakidis, a senior foreign exchange strategist at Bank of America Merrill Lynch. “They’re already below their [inflation] target. They have to acknowledge there are further downside risks to their inflation outlook because of the strong euro.”

Headline inflation was running at a 1.5 per cent pace in July, shy of the ECB’s target of nearly 2 per cent. Core inflation, which excludes volatile energy prices, came in at 1.2 per cent. The minutes of the July meeting of ECB officials revealed some unease with the vigour of the euro, which has also climbed 7 per cent against sterling and 6 per cent versus the Japanese yen in 2017.

The sensitivity of the foreign-exchange market to Mr Draghi’s pronouncements was underlined in late August when his decision not to focus on monetary policy, and the currency, in a speech at a gathering of central bankers in Jackson Hole, Wyoming, was taken as a signal to buy the euro, which last week hit $1.20 for the first time since early 2015.

A stellar rally for the single currency is a sharp contrast to the mood at the start of the year, when fears that the populist Marine Le Pen might capture the French presidency had some forecasting that the euro would fall to parity against the dollar.

Indeed on Friday, Ewald Nowotny, a member of the governing council, cautioned against overdramatising the appreciation of the euro, which traded at close to $1.40 in 2014.

But even if Mr Draghi seeks to temper the euro’s strength this week, some are sceptical it will have a lasting effect should a strengthening euro-zone economy persuade investors to allocate more capital to the region.

“ECB verbal rhetoric may cause a correction but is unlikely to be enough to derail euro strength,” noted George Saravelos, a foreign-exchange strategist at Deutsche Bank.