Paris, London and Frankfurt post gains but Milan and Madrid end in red 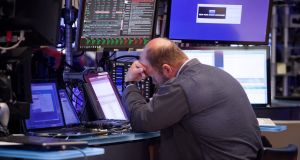 Wall Street: Six of the 11 major S&P indexes were lower on Thursday, with the financial index’s 1.59 per cent fall leading the decliners. Photograph: Michael Nagle/Bloomberg

European shares closed in positive territory on Thursday after the European Central Bank reaffirmed its ultra-easy policy stance and said details on the future of its massive stimulus would come in October.

The economic outlook was less clear in the US where markets were still digesting comments on Tuesday from Federal Reserve governor Lael Brainard, who said the Fed should delay raising interest rates until it is confident inflation that is now “well short” of target will rebound.

Hurricane Irma, on track to hit Florida by the weekend after decimating the Caribbean, put further pressure on investment sentiment.

Recruitment group CPL Resources was among the best performers on Thursday on the Iseq. The stock rose 9.2 per cent after it announced a €25 million share buyback. The strong Irish jobs market has benefitted the company, which also reported decent annual results. Its net fee income was up 2.5 per cent.

Aryzta has beefed up its senior management team, recently appointed Kevin Toland to replace Owen Killian, who left after a difficult period.

Companies focused on the Irish housing market continue to do well. Cairn Homes finished the session up 2.3 per cent.

Direct Line Insurance shares rose 8p to 379.6p as the industry welcomed UK government plans to lower the rates within the system used to calculate compensation payouts. Enthusiasm waned among peers such as Aviva, however.

Unilever rose 33p to 4,530p after announcing that it had snapped up Bristol-based Pukka Herbs for an undisclosed sum. The move gives the consumer giant a stronger foothold in the global herbal, fruit and green tea market.

Bovis Homes shares rose 109p to 1,161p despite reporting that pre-tax profits for the half year to June 30 plunged by 31 per cent. The housebuilder was stung by costs relating to customer complaints over poor quality of its homes and exceptional advisory costs after defending itself in a string of takeover attempts.

Paris, London and Frankfurt posted gains from 0.3 to 0.7 per cent but Milan and Madrid ended in the red, down 0.4 and 0.1 per cent respectively due to heavy losses in their banking and financial sectors.

The banking sector, whose lending business benefits from higher interest rates, fell 0.8 per cent as fears grew that the strength in the euro could delay monetary policy tightening. Among top euro-zone bank decliners were Spain’s Sabadell and Italy’s Banco BPM down 3.6 and 2.6 per cent respectively.

A fifth day of gains in auto stocks helped German shares shrug off a spike in the euro as cheap valuations have revived investor interest in the sector. Carmakers were a bright spot, up 0.4 per cent.

All was not positive in the sector, however, with Ferrari falling 6.9 per cent after a double downgrade from Morgan Stanley to “underweight” from “overweight”. The bank warned a potential listing of Maserati could affect Ferrari.

Wall Street ended little changed after a moderate late-day rally as media stocks, which slumped on negative business updates from Walt Disney and Comcast, were offset by gains in healthcare shares. Comcast dropped 6.2 per cent after the cable operator warned of subscriber losses, while Disney shares fell 4.4 per cent after the company cautioned about its profit growth.

With Irma looming, shares of insurers were weaker, with the Dow Jones U.S. Insurance index off 1.9 per cent.