Sterling heads for fourth weekly decline in a row against euro 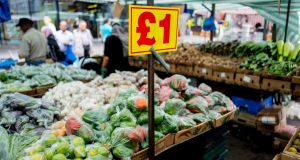 Sterling touched its weakest level versus the euro since October on August 23rd.

The pound headed for its fourth consecutive weekly decline against the euro as concerns over Brexit negotiations and tepid economic data weighed on the UK currency.

Sterling touched its lowest level versus the euro since October on August 23rd. The pound has had a rocky week as Brexit papers released by the UK government did little to ease doubts on whether it was enough to convince the European Union to allow trade talks to start as soon as October. With the UK yet to clarify how much it will pay the EU as a Brexit bill, investors will closely scrutinize talks next week to gauge how smooth the negotiations will be.

Euro was little changed against sterling at 0.9220, having climbed to 0.9236 on Wednesday, its highest since October 7. While sterling could face further political headwinds, analysts at ING Bank say it’s unlikely to weaken to parity with the euro.

The pound erased an earlier weekly decline against the dollar after Federal Reserve Chief Janet Yellen refrained from any hawkish policy comments in her Jackson Hole speech.

Analysts at Commonwealth bank of Australia, including Elias Haddad, said that the Bank of England will be in no rush to raise rates given the slowing economy. Also “as long as Brexit-related uncertainties persist, a lower GBP may be necessary to encourage greater foreign capital flows to the UK to finance the current-account deficit,” they write in a note to clients.

Broader markets are happy to push sterling lower with any negative news, and there is a big gap opening up between the outlook of both the eurozone and the UK economies,” said David Madden, a markets analyst at CMC Markets in London.