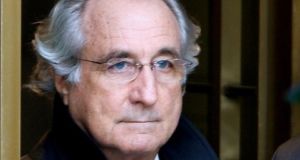 The Irish investment fund that helped open a floodgate of European cash for Bernard Madoff’s bogus securities firm in the early 1990s agreed to pay $687 million to victims of the fraud to resolve a trustee’s lawsuit – the biggest settlement in the case in six years.

The deal was struck with Dublin-based Thema International Fund, part of a web of offshore entities linked to Austrian banker Sonja Kohn, an old friend of Madoff’s, and the Benbassat family of Swiss investment professionals. They gave Madoff vital access to cash as his Ponzi scheme began to lose steam, the trustee, New York attorney Irving Picard, has said.

Details of the accord were filed on Wednesday with US. Bankruptcy judge Stuart Bernstein in Manhattan. An approval hearing is scheduled for October 25th. The deal will boost total recoveries for victims to about $12.7 billion, or about 72 cents for every dollar in principal that was wiped out by the fraud.

Picard is still recovering large amounts of money for thousands of victims through lawsuits against funds and customers who profited from the scam. Manhattan-based Bernard L Madoff Investment Securities’s clients, including dozens of offshore feeder funds, lost $17.5 billion in principal.

The deal “is the latest in a series of highly successful negotiations and mediations”, Oren Warshavsky, one said Picard’s lawyers at Bakerand Hostetler, said in a statement. Two recent settlements with funds related to Thema put total recoveries since June at more than $1 billion, he said.

The details of Thema’s case track the story of Madoff’s expansion into Europe in the early 1990s, as sources of new cash in the US threatened to dry up. Kohn, who met Madoff while working in New York in the 1980s and later founded Vienna-based Bank Medici, regularly directed customers to the con man, according to court papers. In 1992, she introduced Madoff to Mario Benbassat, the Swiss family’s patriarch and founder of the Geneva-based asset manager Genevalor, Benbassat and Cie, as a possible source of new funds.

“Madoff recognised that the Benbassats could potentially direct a large influx of new money,” the trustee said in the filing. “For their part, the Benbassats came to believe that they had a ‘favored’ position with Madoff.”

The Benbassats in 1992 created their first Madoff feeder funds, Lagoon Investment Ltd and Hermes International Fund Ltd., both based in the British Virgin Islands. Thema International’s Madoff account was opened in 1996 through a Bermuda-based custody bank, according to Picard. Bank Medici, where Kohn was chairwoman, was Thema’s investment manager, while Genevalor helped set it up and sell it. Management and advisory fees for the group of funds totalled about $221 million, according to court records.

Over 15 years, the Benbassats and their associates met with Madoff dozens of times at his offices in Manhattan, Picard said in 2015. They directed about $1.9 billion to Madoff from all over Europe, according to court records.

Mario Benbassat died in 2011 at 77. His estate, along with his sons Alberto and Stephane, who were also involved with the funds, have remained part of the litigation. Their lawyer, Matthew Feldman of Willkie Farr and Gallagher in New York, didn’t immediately return a call for comment. Thema’s lawyer, Joseph Moodhe, and Kohn’s attorney, Isaac Neuberger, also didn’t immediately return calls.

Madoff (79) pleaded guilty in 2009 and was sentenced to 150 years in prison. Five of Madoff’s top aides were convicted after a trial in 2014. Neither Kohn nor anyone in the Benbassat family were ever accused of criminal wrongdoing.

Bank Medici was shuttered by Swiss regulators after Madoff’s fraud was exposed. Thema and its principals have long denied any wrongdoing, laying the blame on Madoff and the feeder fund’s custodian bank, HSBC Holdings Plc. They sued the London-based bank for $1.1 billion, blaming the lender for failing to scrutinize Madoff’s operations. The suit was settled in 2013. HSBC also paid $62 million to Thema investors to settle a lawsuit in Manhattan federal court.

Thema and the funds were sued by Picard in 2010. Lagoon and related funds in June agreed to hand over about $240 million to the trustee to settle the case, while Thema Fund Ltd and its affiliates agreed to pay about $130 million.

Picard sued Kohn in London as part of his lawsuit against Madoff’s sons and other directors of his European operations, alleging they were liable for the losses of Madoff’s UK unit. But the lawsuit was dismissed and Kohn was vindicated. Madoff “tainted their good names simply by association,” a judge said.

Picard, an attorney with Baker and Hostetler in Manhattan, was hired by the industry-financed Securities Investor Protection Corp to recover cash for victims shortly after Madoff’s arrest in December 2008. SIPC, rather than the victim fund, has funded all of the fees and expenses associated with the case.