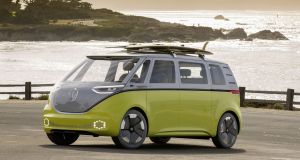 The first Volkswagen that will use Aeva’s lidar is the ID Buzz – a new electric version of its mid-century camper van due out in 2022.

Aeva, a start-up founded by two former Apple engineers that builds vision sensors for self-driving cars, has received “a significant investment” from Volkswagen, the world’s largest carmaker, the two companies said on Wednesday.

The Silicon Valley-based group, founded in 2017 and with 80 employees, claims to have invented a new kind of lidar – a light detection and ranging sensor – that manages to be small and low cost, yet features high performance and consumes little power.

Soroush Salehian, Aeva co-founder, calls that combination the “holy grail” for lidar– a critical technology that works by sending out pulses of light and tracking how long it takes for the pulse to return. This allows a car to know the distance and depth of objects, including cars and pedestrians, resulting in 3D maps.

Typical lidar systems are big pieces of hardware that sit conspicuously on an autonomous car’s roof, spinning rapidly as they send out beams of light to detect their surroundings. Aeva’s lidar, by contrast, has been shrunk into a single chip, has no moving parts, and can be fitted next to a car’s lights.

“A major milestone is putting all the optics on a chip,” said Mina Rezk, Aeva’s other co-founder. “Nobody has been able to put any part of this on a chip before and show that it can go to mass volume.”

Aeva’s bold claims were underlined by Volkswagen, which plans to equip consumer vehicles with the sort of lidar systems that currently cost tens of thousands of dollars.

Alex Hitzinger, head of VW Autonomy, called Aeva’s product “the best lidar solution on the market” and said it solved a fundamental perception problem that has prevented autonomous technology from achieving mass scale.

“When you put lidar components on a chip, it becomes highly scalable,” he said.

The first Volkswagen that will use Aeva’s lidar is the ID Buzz – a new electric version of its mid-century camper van due out in 2022.

Google’s self-driving sister company, Waymo, said in 2017 it had already driven down the costs of lidar units from $75,000 (€67,609) in 2011 to $7,500. Since then, a host of lidar start-ups including Velodyne, Luminar and AEye have said they can reduce the costs further as the technology deploys at scale. Aeva said its units will cost “less than $500.”

The importance of lidar is difficult to overstate for the autonomous industry. According to Woodside Capital Partners, the lidar market will grow from around 100,000 units sold last year to 4.7 million units in 2025.

The past few years have been a frenzy for start-ups trying to get an edge in the growing market. According to CB Insights, the five biggest funding deals of all time among self-driving tech suppliers have each been lidar groups, led by Velodyne raising $150 million in August 2016.

But Elon Musk, chief executive of Tesla, doubted the technology in April, saying that “anyone relying on lidar is doomed.” Instead, he plans to build autonomous vehicles relying only on cameras and radar.

Mr Musk’s “comment is based on the extremely high cost of lidar, but if the cost isn’t high any more than the argument falls away,” Mr Hitzinger said. – Copyright The Financial Times Limited 2019

1 Fianna Fáil may have just pressed the pause button on the property market
2 UK to prioritise EU trade deal over one with United States
3 Who are Ireland’s 17 billionaires?
4 State ranked highly for attracting skilled workers but low on gender issues
5 Dunnes premature in challenging Point Village resolution move, Supreme Court finds
6 Are there annual limits on inheritances or gifts to a child?
7 My father in a nursing home wants to gift me his house
8 Belfast regeneration project worth £500m gets green light
9 European investor acquires Harcourt Road offices for €55m
10 Ireland ranked second in Europe for data breach notifications
Real news has value SUBSCRIBE