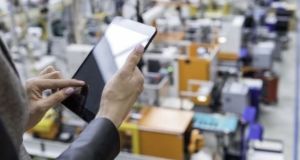 Irish manufacturing business conditions continued to worsen last month as a reduction in output led to workforce numbers falling for the first time since September 2016.

The AIB manufacturing purchasing managers’ index (PMI) for November shows a sector that remains in the doldrums.

On the demand front, inflows of total new business increased for the second month running, albeit at a marginal pace. However, export sales declined and business confidence, while improving, remained historically weak as Brexit continued to weigh on sentiment.

“Overall, conditions in Irish manufacturing are best described as being flat. The November data show a marginal decline in production with a reading of 49.4, but a slight increase in new orders for a second consecutive month, with this sub-component at 50.5. Meanwhile, there was a small contraction in employment in November, which had increased modestly in the previous month,” said chief economist Oliver Mangan.

He attributed the slowdown to weakening foreign demand, noting that while total orders were up marginally last month, new export sales fell for a fifth consecutive month and at a solid pace.