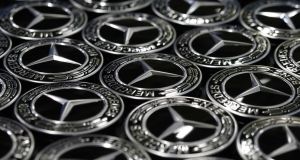 Mercedes-Benz owner Daimelr aims to save €1.4 billion in personnel costs.

Daimler said it would cut more than 10,000 jobs in the next two years, as the Mercedes-Benz owner added to a devastating series of job losses across the German car industry.

The cost of investing in electric vehicles and pressure from falling sales and profits are spurring a severe overhaul of the entire industry, with 50,000 job losses announced this year so far.

German companies have been hardest hit, with car parts supplier Continental announcing in September that 20,000 jobs were at risk and Audi announcing 10,000 cuts this week.

At Daimler, Wilfried Porth, board member for human resources, said the job cuts would amount to “a low five-figure number”, but refused to reveal a precise estimate.

“The automotive industry is undergoing the greatest transformation in its history,” the company said.

Daimler had already announced that a tenth of managers would be axed as it seeks to save €1.4 billion in personnel costs, but will now let go of “thousands” of administrative staff in addition, taking the total loss to more than 10,000 internationally.

As Europe’s largest economy suffers a slowdown in its dominant auto sector, the German government on Friday confirmed a new industrial strategy, which includes measures to protect key technologies from foreign takeovers.

The move was criticised by the country’s car lobby, the VDA, which warned that it would “restrict entrepreneurial activity”.

The VDA had previously warned that 70,000 jobs will be at risk across the country over the next few years, as companies grapple with the move away from the production of combustion engine cars.

France’s PSA and Italy’s Fiat Chrysler are merging to help boost their electric investments, while Volkswagen and Ford have also pooled some development resources.

In November, Daimler warned that it would post significantly lower profits for at least two years, citing the dual threats of Brexit and tariffs, as well as the struggle to produce enough battery-powered cars to meet impending EU carbon emissions targets.

If Daimler fails to achieve a fleet-wide measure of around 100g CO2 per km by 2021, it could face upwards of €1 billion in fines from Brussels.

Assembly-line employees are not included in the latest cuts. Daimler had previously agreed a jobs guarantee with workers’ representatives, which protects operational staff in Germany against compulsory redundancies until the end of 2029.

Staff costs at the Mercedes brand alone amount to about €13 billion annually.

Chief executive Ola Kallenius betrayed a frustration with the “inertia” of personnel costs, citing the difficulties of navigating strict labour laws. “It’s the one [SPENDING AREA]that requires the hardest work, especially in Germany,” he said.

Daimler said it would reduce its headcount in a “socially responsible manner”, and use “natural fluctuation to cut jobs that become vacant”.

The carmaker, which directly employs 130,000 people in Germany, added that voluntary redundancy packages would also be offered to those nearing retirement.

The company said it would seek to make further savings by offering its current workforce the option of reducing weekly working hours.

“A reduction in capacity must not be carried out on the backs of employees,” warned Michael Brecht, chairman of Daimler’s works council.

The council added that “the focus of personnel cost reduction must be on the improvement of processes and workflows”. – Copyright The Financial Times Limited 2019

1 Bank leaked my loan request to family who tried to rip me off
2 Flight attendent seeks High Court injunction against Aer Lingus
3 Wealthy investors’ legal challenge against Revenue fails
4 Coronavirus: Irish holding back on holiday plans
5 C&C abandons US agreement with Pabst for cider portfolio
6 Coronavirus: ‘All bets are off’, says aircraft industry chief
7 Tax burden on Irish households among lowest in EU
8 How to . . . move (almost) everything to your new phone
9 Beau Lotto: How to rewire our brains to spark innovation
10 Solar panels: Are they worth the investment?
Real news has value SUBSCRIBE