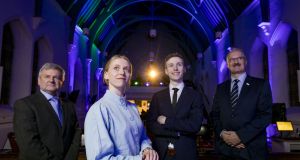 Jones Engineering is investing €7 million in a new Carlow plant that will make modular buildings.

The long-established Dublin group has created 50 new jobs at the manufacturing and research facility – its first – and expects to increase employment there to 150 in the next 18 months.

“In a sector that is often accused of being inefficient and lacking in innovation, this is an innovative solution to achieving more sustainable construction.”

The 83,000sq ft Carlow factory is manufacturing prefabricated and modular units for use in Ireland and for export to countries across Europe.

“We design and manufacture on site in Carlow and then ship completed modular or prefabricated units to the construction site,” Mr Curley said. “We are currently exporting to mainland Europe and we expect the market to continue to grow.

He said the group had chosen Carlow for the investment because of the county’s “legacy of engineering and manufacturing industry, the presence of Carlow IT and the availability of the skilled professionals we require in our manufacturing process”.

Jones Engineering Group says it is the largest Irish services firm in the domestic market. It also has a large presence in the Middle East, where it has offices in Bahrain, Qatar and Saudi Arabia, and in Utrecht, the Netherlands.

The company, which focuses on large-scale infrastructure projects in the pharmaceutical, healthcare, IT and data centre industries, says that close to half its €443 million in revenues last year was generated overseas.

Turnover jumped almost 40 per cent in 2018, delivering a profit after tax and amortisation of goodwill of €30 million.

Mr Curley anticipates continued growth in 2019. “This current year has seen Jones Engineering Group secure a number of significant projects and we anticipate that turnover will be in the region of €650 million.”

That would mean revenue has more than doubled in just two years.

1 Working from home: New costs, new stresses and little relief
2 Joint accounts: if one of us dies, can the other access the money?
3 We are ‘sale agreed’, but can we go back with a lower offer?
4 Airline stocks take off as coronavirus worries ease
5 Investor alleges fraud over collapse in property fund value
6 HSBC board rethinks overhaul and seeks even deeper cuts
7 Fierce debate brews as EU Commission lays out recovery plans
8 DAA offers workers up to two years’ wages in redundancy plan
9 Electrical contractors fear closure under new pay law
10 ‘I’ve so many outgoings with family life . . . it puts manners on you’
Real news has value SUBSCRIBE