Carmaker’s priority is to focus on reviving struggling business 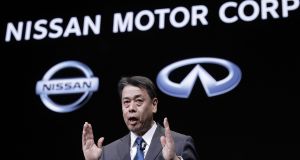 Makoto Uchida, president and chief executive of Nissan Motor, during a news conference at the company’s global headquarters in Yokohama, Japan, on Monday. Photograph: Kiyoshi Ota/Bloomberg

Nissan’s new chief executive has shelved talks on levelling the ownership structure on its alliance with Renault, saying the two carmakers will focus on reviving their struggling businesses.

In his first news conference since taking the top job on Sunday, Makoto Uchida said Nissan was committed to its 20-year partnership with the French group, where ties were strained in the wake of the ousting a year ago of their former boss Carlos Ghosn.

“I am not holding any discussions on capital structure at the moment,” Mr Uchida said at Nissan’s headquarters in Yokohama. “Both Renault and Nissan are struggling with earnings. In the near term, the priority is in finding how the alliance can contribute to each of the companies in raising their revenue and profits.”

In the weeks ahead of his resignation as Nissan CEO in September, Hiroto Saikawa held talks with Renault chairman Jean-Dominique Senard about how to equalise the capital structure of the alliance, according to people with knowledge of the negotiations. Renault owns 43 per cent in Nissan while the Japanese group holds 15 per cent in its French partner.

“The alliance is a core source of competitiveness for Nissan,” Mr Uchida said. “We hope to continue with the alliance based on the principle of equal partners and while maintaining the company’s independence.”

Ahead of Mr Ghosn’s arrest last November over financial misconduct allegations, which he denies, the former chairman had been pushing for Nissan’s full merger with Renault.

But officials both inside Nissan and Renault say Mr Uchida’s focus should be in reviving the Japanese group, which has suffered a collapse in profits and sales in its core markets, particularly in the US. Its French partner has also issued a profit warning, blaming tough market conditions and delays to key vehicle launches.

On Monday, the 53-year-old Mr Uchida refrained from providing details of how he would turn the company round but he left the possibility open of re-examining the current restructuring measures, involving a cut of 12,500 jobs globally.

Mr Uchida, who grew up outside Japan, spent more than a decade at a Japanese trading house before joining Nissan in 2003, attracted to the company’s growth strategy on the back of its alliance with Renault. He was an alliance executive in purchasing before leading the company’s operations in China, one of the group’s most important markets.

He was chosen from a list of more than 100 CEO candidates as the best-equipped to repair Nissan’s ties with Renault and to make a decisive break not only from the Ghosn era but also from subsequent infighting that paralysed the company.

“I do not believe our business strategy was wrong,” Mr Uchida said, referring to Mr Ghosn’s revival of Nissan from near bankruptcy in the late 1990s. “But over time, we had created a corporate culture where people felt compelled to say they can achieve targets they could not meet.”

Last week Renault, Nissan and its third partner Mitsubishi agreed to launch alliance projects, which people familiar with the discussions said would focus on new technologies such as autonomous driving and artificial intelligence. – Copyright The Financial Times Limited 2019