SDC Trailers to make number of staff redundant because of Brexit 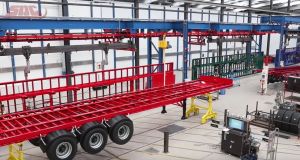 One of the North’s leading manufacturers which employs 800 people has warned that it is going to be forced to make “a number of employees redundant” because of Brexit.

SDC Trailers in Toomebridge, Co Antrim, which is part of the Chinese-owned CIMC Group, is a trailer manufacturer which supplies both haulage and logistic sectors in Ireland and the UK.

The company has three manufacturing plants in the North in Toome, Magherafelt, Co Derry, and Antrim which employ 650 people, and one plant in Mansfield in Nottinghamshire, England, where it employs a further 150.

In a statement on Monday, SDC Trailers said it was unable to confirm how many jobs might be under threat in the company, but that a consultation process was now under way with its workforce about their future.

“In recent months it is clear that the uncertainty of Brexit and other economic concerns has resulted in a slowing down of capital purchases from retailers, logistics firms and others.

“We have had to respond to this slow down in demand by entering into a period of consultation with our employees with the unfortunate likely outcome being a number of employees being made redundant.”

SDC Trailers has been in business since 1978, it was previously owned by Powerscreen International and then acquired by Retlan Manufacturing Limited, which was controlled by the Northern Ireland-based Donnelly family, in 1998.

Three years ago Retlan Manufacturing was sold to the CIMC Group for an estimated £91.7 million (€106.7m).

Political leaders in the North have warned that any job losses, particularly at the SDC Trailers headquarters in Toome, would have a devastating impact on the small rural community where it is based.

Alliance MLA John Blair said: “Yet again we see an important company highlight how the uncertainty around Brexit has caused their customers to reassess capital investments, including the purchase of trailers. This has the obvious follow-on impact for companies such as SDC Trailers, who are an important employer in this rural area.”

The confirmation by SDC Trailers that Brexit has significantly impacted on its business underlines growing concerns that other firms in the North are also struggling.

Stephen Kelly, chief executive of the industry group Manufacturing NI, said: “We’ve been warning for some time that those parts of our economy which are particularly exposed to confidence in the market to make large capital spends are under stress.

“Whether it be transport equipment, construction supply or other sectors, there is significant evidence from the Bank of England and others that Brexit is a huge drag on investment.”

“Business has been calling for sanity, not just certainty. The converse of this is that buyers are poised to make investments should the right outcome be found. That will protect the UK economy from the significant headwinds which appear to be developing on global markets.”