Xerox lines up Citigroup financing as it weighs bid for HP

Merger would strengthen position in challenging market for printers and copiers 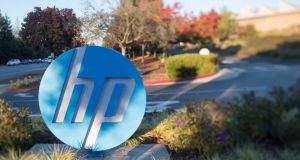 Xerox has lined up financing from Citigroup as it weighs as potential bid for HP, according to a person with knowledge of the matter.

Xerox is considering making a cash-and-stock offer for HP, said the source. Xerox chief executive John Visentin would run the combined company under the proposal being discussed, the person said.

Xerox sees room for about $2 billion of annual cost savings from combining the two companies, the person said. No final decisions have been made and there’s no certainty the deliberations will lead to a firm offer, according to the person.

HP, based in Palo Alto, California, rose as high as 18 per cent Wednesday, after the Wall Street Journal reported late Tuesday that Xerox was considering a bid. The shares were up 11 per cent to $20.45 at noon in New York trading, giving it a market value of about $30.3 billion.

On Monday, Xerox had said it will sell its 25 per cent stake in Fuji Xerox, its joint venture with Fujifilm Holdings, for $2.3 billion, after investor activism scuppered a deal involving the two companies.

Xerox had scrapped its $6.1 billion deal to merge with Fujifilm last year after lobbying by two of its main investors, Carl Icahn and Darwin Deason.

Acquiring HP would buttress Xerox’s share of the printing and copying market, which has been hit hard by a global shift toward cloud computing.

HP has been struggling with its printer business segment recently, with the division’s third-quarter revenue dropping 5 per cent year-on-year. In October, it had announced a plan to cut up to 9,000 jobs as part of a restructuring programme aimed at cutting costs.

HP, which traces its roots to 1939, is the world’s largest personal computer maker behind China’s Lenovo. In 2015, it split from software provider Hewlett Packard Enterprise.

Both companies have a presence in Ireland, with Xerox already employing 650 people here. – Bloomberg

Ganley dismisses Trump attack on his company as ‘politics’ 21:38
DAA tenders for eight-year €425m upgrade of Dublin Airport 21:24
Norwegian Air says Boeing dispute to be decided in US court 20:59
European stocks pressured by yields, Iseq underperforms peers 19:22
EU and US agree to suspend tariffs on billions of euro worth of trade 18:30
Search executive
jobs on irishtimes.com