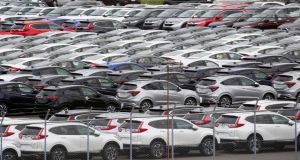 Operating profit for the fiscal year ending March will be Y690 billion instead of Y770 billion, the company said in a statement Friday. Analysts are predicting a full-year profit of Y748 billion on average.

The revenue forecast was cut to Y15.05 trillion from Y15.65 trillion, following a prior revision in August.

The weak outlook by Honda and other smaller Japanese carmakers contrast with Toyota, which is sticking by its profit forecast thanks to healthy sales in the US and Japan.

Even amid weaker demand, global automakers are figuring out ways to survive the industrial shift toward electronic vehicles and self-driving technology.

“The downward revision was within expectations, and profit margins of around 3 per cent in the car business is still tough,” said Koji Endo, an analyst at SBI Securities. – Bloomberg