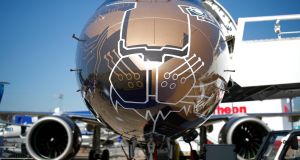 An Embraer E195-E2 aircraft. The EU has warned a Boeing deal could remove Embraer as the third largest global competitor to both Boeing and Airbus. Photograph: EPA/Ian Langsdon

European regulators halted their in-depth anti-trust investigation into Boeing’s plan to invest in Embraer, saying they had not received sufficient information from the planemakers.

The European Commission has been investigating the venture, warning that the deal could remove Embraer as the third largest global competitor to both Boeing and Airbus, which “may, therefore, result in higher prices and less choice”.

The commission, one of the world’s toughest merger regulators, said on Monday that it “stopped the clock”, and a review could only be restarted once it gets the answers it needs.

The heightened scrutiny puts new pressure on Boeing’s plan to take an 80 per cent stake in a venture controlling Embraer’s commercial airplane and services businesses.

The commission had initially set a February 20th deadline for a ruling on the deal, and then extended its timing until March 5th, before the review was suspended. – Bloomberg