InfraStrata had previously been looking to secure additional debt funding 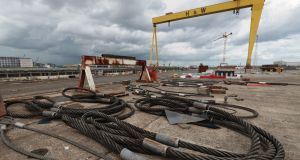 InfraStrata has now signed a “conditional contract” to buy the principal assets of Harland & Wolff but needs to raise £6 million (€6.95 million) via a new share placing to complete the acquisition.

The London AIM-listed company initially signed signed heads of terms on October 1st to buy the assets of the historic shipyard from administrators BDO NI.

The shipyard, which built the Titanic, once employed 35,000 people but had only 130 people left on its books when it was placed in administration.

InfraStrata wants the Harland & Wolff assets because one of its subsidiaries is planning to develop a £400 million natural gas storage facility off the coast of Co Antrim and it believes the assets will reduce both the gas storage facility’s overall project costs and construction timelines.

The company paid a £500,000 cash deposit last month to the administrators to secure exclusivity over the Harland & Wolff assets, which include the giant yellow gantry cranes known locally as Samson and Goliath. It funded the deposit from a £2.2 million conditional loan agreement which it had signed with YA II PN Ltd and Riverfort Global Opportunities PCC Limited.

InfraStrata said at the time it would fund the remaining £5.5 million that it owed Harland & Wolff’s administrators through a possible “debt and equity mix”.

Until recently, it had been in discussions with “lenders” but these failed to produce a result and, on Sunday, it confirmed the company is now “seeking to raise a minimum of £6 million (before expenses), through a placing of new ordinary shares by way of an accelerated bookbuild at 0.3 pence per share”.

“The proceeds of the placing will be used to finance the acquisition of the principal assets of Harland & Wolff, repay/restructure the outstanding amounts pursuant to the bridging loan, progress the Islandmagee gas storage project and for general working capital purposes,”it added.

InfraStrata also said that it will draw down a further £500,000 from the conditional loan agreement to pay for Harland & Wolff overheads during November.

In a statement on Sunday, the company said “the strategic Harland & Wolff assets acquisition enables InfraStrata to bring in-house a large part of the engineering and fabrication requirements for the company’s Islandmagee gas storage project and proposed FSRU [floating storage regasification and reloading unit] project” in northwest England.

It has said the 70 former Harland & Wolff employees who did not opt for redundancy when the shipyard went into administration will be “retained immediately following completion of the acquisition”.

InfraStrata has also forecast that a new management is likely to be recruited for the shipyard by the first quarter of 2020 and that it “plans to significantly increase the size of the workforce by several hundred over the next five years” as it develops various projects.

In addition, it hopes that Harland & Wolff’s “highly skilled workforce” will create opportunities for the company to secure “revenue streams” by providing services to energy, maritime and defence sectors.

InfraStrata has set December 5th as the target date for the completion of the purchase of the the shipyard assets but said the company may “elect” to extend the completion date of January 7th, 2020.