Chairman says Dennis Muilenberg has ‘done everything right’ since grounding 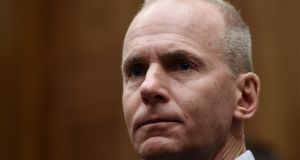 Boeing chief executive Dennis Muilenburg will waive his 2019 bonus and decline equity grants for at least a year until the grounded 737 Max fleet is flying again “in its entirety”, chairman David Calhoun said.

Mr Muilenburg retains the confidence of Boeing’s board and is the right person to get the troubled jetliner back in the air, Mr Calhoun said on CNBC on Tuesday.

“We’re going to support Dennis through this process,” Mr Calhoun said. “From the vantage point of our board, Dennis has done everything right,” though he also indicated that Mr Muilenburg would be judged on successfully getting the Max back in service.

The endorsement came a day after Democratic lawmakers renewed their attack on the embattled chief executive, accusing him of fostering a “culture of concealment and opaqueness”.

Mr Muilenburg suggested scrapping his bonus during a phone call over the weekend, Mr Calhoun said. The chief executive appeared off-guard as angry lawmakers and the relatives of crash victims assailed his pay during an often-contentious appearance before Congress last week. Mr Muilenburg also faced numerous calls to resign during two days of hearings.

Mr Muilenburg will presumably still get a salary, which was $1.7 million last year. He also received other taxable perks, such as use of the company aircraft and life insurance premiums. – Bloomberg