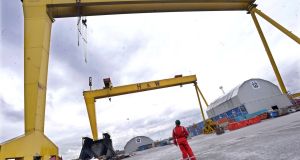 Harland and Wolff’s cranes. InfraStrata wants to purchase the shipyard’s assets because one of its subsidiaries is planning to develop a £400m gas storage facility in Co Antrim. Photograph: Stephen Davison

The London AIM-listed group successfully raised the capital in a rights issue at 0.3 pence per share. The company still needs final approval from its shareholders to acquire the assets of the shipyard, which it will seek at a general meeting on November 29th.

“We are very pleased with the result of the placing bookbuild as this will provides us with the necessary capital to complete the acquisition of the Harland and Wolff assets,” said John Wood, chief executive of InfraStrata. “Subject to shareholder approval at the upcoming general meeting and upon admission of the new shares on AIM, the company will have an excellent mix of institutional and retail investors, which we expect will provide long-run share price stability and liquidity respectively.”

InfraStrata wants to purchase the Harland & Wolff assets because one of its subsidiaries is planning to develop a £400 million natural gas storage facility in Islandmagee, Co Antrim. It believes the shipyard assets will reduce both the gas storage facility’s overall project costs and construction timelines.

Mr Wood said the support of key institutions for the share placing was a “vote of confidence” in its future plans and overall business strategy.

“The company remains on track to complete its debt capital raise to complement this equity raise,” he said. “Debt capital will take the form of asset-backed finance and working capital trade finance, both of which we expect to come to fruition soon after completion of the acquisition.”

Mr Wood said InfraStrata was “now on the cusp of a transformational change”.

“Along with the cost savings that will accrue to the Islandmagee gas storage project, this multipurpose facility in the heart of Belfast is expected to provide multiple revenue streams.

“We are bullish about the acquisition as it provides immediate and near-term revenue-generating opportunities as well as significantly increasing the value of the company’s balance sheet.”

The joint administrators appointed to Harland & Wolff in August hope the deal, which will provide a lifeline for the yard’s remaining 79 employees, will be completed by December 5th.

Michael Jennings and Brian Murphy of BDO Northern Ireland said: “The agreed terms of sale include the transfer of the remaining employees on their existing terms and conditions to the purchaser, therefore protecting and safeguarding the employment of the workforce.

“The purchaser has also agreed to fund the ongoing running costs of the shipyard for November and also for December if the target completion date is extended to January 2020.”