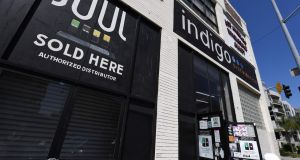 Altria wrote down the value of its investment in Juul by $4.5 billion as the ecigarette start-up comes under increasing pressure from regulators over the health effects of vaping. Photograph: Robyn Beck/AFP via Getty Images

Altria wrote down the value of its investment in Juul by $4.5 billion as the ecigarette start-up comes under increasing pressure from regulators over the health effects of vaping.

The tobacco group, parent of Marlboro-owner Philip Morris USA, valued its investment in Juul at $12.8 billion at the end of June but said in a statement on Thursday accompanying its third-quarter results that it had booked the non-cash, pre-tax charge on the start-up.

Altria said its decision to record the impairment was driven by the cumulative effect of various e-vapour bans in certain US cities, states and some international markets, the increased likelihood of the Food and Drug Administration removing flavoured vaping pods and “other factors” rather than a “single determinative event or factor”.

Ecigarettes had previously been lauded as a less harmful alternative to traditional cigarettes. US medical experts have tied at least 30 deaths and more than 1,600 hospitalisations in the country to vaping-related illnesses.

Uncertainty over Juul’s future was a big factor in Altria and Philip Morris International in September calling off talks about a $200 billion merger and the sacking of the start-up’s chief executive.

Altria agreed to pay about $13 billion for 35 per cent stake in Juul last December. The price paid raised eyebrows at the time, with some analysts describing the valuation as “unusually high”. Juul employees shared a $2 billion bonus pool as a result of the deal.

Since then, Juul has been caught in a political, regulatory and legal backlash over vaping. US medical experts have tied hundreds of cases of lung damage to vaping, although they have not blamed Juul specifically.

Flavoured vaping variants have been blamed for encouraging underage use and getting a new generation addicted to nicotine.

Juul this week laid out plans for a restructuring. Between 10 per cent and 15 per cent of Juul’s 4,000-strong workforce is set to be cut. Several executives, including its chief financial officer, are leaving.

The investment in Juul had been among several initiatives from Altria to safeguard its long-term future. Tobacco groups are fighting over a share of the market for alternatives as consumers in western markets reject traditional cigarettes at an accelerating rate.

Altria said its net revenue in the three months ended September 30th rose 2.3 per cent from a year ago to $5.4 billion, which edged ahead of Wall Street forecasts, but its impairment on Juul saw it swing to a reported loss of $1.39 per diluted share.

The company affirmed guidance to increase adjusted earnings by between 5 per cent and 7 per cent a diluted share in 2019 and also announced a new EPS growth objective of 5 per cent to 8 per cent for the years 2020 through 2022.

Shares in the company were down 1.5 per cent in morning trade on Thursday. –