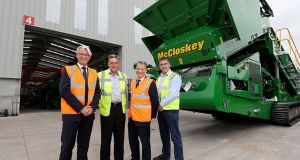 One of Northern Ireland’s largest manufacturers, Canadian-headquartered McCloskey International, which employs nearly 300 people in the North, has been acquired by the Finnish industrial machinery company Metso for €279 million.

McCloskey International was founded in 1985 by Co Derry-born Paschal McCloskey who, aged 26, left his family farm in Northern Ireland to travel to Canada at the height of the recession in the 1980s.

Mr McCloskey’s decision to leave the North ultilmately set him on a path to becoming one of Northern Ireland’s most successful entrepreneurs and a self-made multi-millionaire businessman several times over.

When he was a teenager Mr McCloskey had completed a metal working apprenticeship and after working in Canada for a time he got the opportunity to buy a fabrication business that had gone bankrupt.

From that initial purchase Mr McCloskey grew an industrial machinery business that became a global leader in the screening and crushing sector and is widely used in major infrastructure projects, mining sectors and waste management recycling industries.

The company employs 900 people in Canada, the United States and Northern Ireland and is expected to report sales for the 12 months ending September 2019 in the region of €330 million.

Although based in Ontario, McCloskey’s European headquarters are located in Tyrone where it has two sites in Coalisland and Granville which employ more than 260 people.

The company recently completed a £17 million investment in Tyrone which included an additional 120,000sq ft manufacturing facility at Granville.

Mr McCloskey, who was president and CEO of the company, has been a strong supporter of his Northern Ireland facilities, which have been in operation since 2002.

He previously said the latest multimillion pound investment in Tyrone cemented his commitment to the business and that it would position the company to “increase sales”.

McCloskey International’s new owner, Metso, is listed on the Nasdaq Helsinki in Finland and reported annual sales of about €3.2 billion in 2018.

Metso employs more than 14,000 people in more than 50 countries.

Commenting on the sale of the business he founded Mr McCloskey said he was proud of what the company had achieved.

“I know that joining Metso is the right move for all our customers, employees, dealers and business partners.

“The combination of our unique focus on products and people and Metso’s global resources will help create even better solutions for our customers,” Mr McCloskey said.

Metso has said it plans to continue to develop McCloskey brands and distribution channels independent of the its own business channel.

The Finnish company will pay €279 million upfront for McCloskey International under the terms of the deal, which is expected to close by quarter four 2019, with a further potential earn out payment of up to €23 million in two year’s time.