Ford claims closure of Welsh plant not related to Brexit

Production at Bridgend engine plant will end next year, with loss of 1,700 jobs 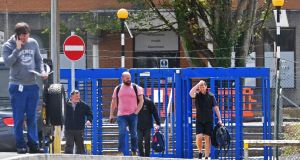 Workers leave the Ford engine plant near Bridgend, south Wales, following the announcement that it will close in September 2020. Photograph: PA

Ford will close its engine plant in Bridgend, south Wales, next year, with the loss of 1,700 jobs.

The company blamed the ending of a contract with Jaguar Land Rover and a fall in sales of petrol engines amid huge changes in the car industry, stressing that the decision was not related to Brexit.

The 40-year-old plant will close in September 2020, affecting jobs in companies supplying goods and services to the plant, and delivers another huge blow to the UK motor industry following news that Honda is to shut its factory in Swindon, while other firms are cutting back.

Last month Ford announced plans to eliminate 7,000 jobs, or about 10 per cent of its global workforce, as part of its ongoing, $11 billion (€9.85 billion) effort to restructure its business.

A review of Ford’s Irish operation is expected to see nearly 20 jobs cut from its Cork office, with staff either departing or offered reassignment to the UK or mainland Europe operations. The company employs just over 30 in its Irish head office.

In a statement earlier this month, Ford Ireland said: “We confirm that we have entered into formal consultation regarding a proposal to further align our market representation in the UK and Ireland.”

The brand’s market share in the Republic has slipped in recent years, from 10 per cent of new car sales in 2016 to 8.6 per cent for 2019 to date. Key models such as the Mondeo and Focus have suffered as car buyers move to crossovers, where Ford has been relatively slow to deploy competitive models.

UK unions said on Thursday that the Bridgend news was devastating for the plant and the UK economy, pledging to resist the closure “with all their might”.

Ford’s European president, Stuart Rowley, said Bridgend workers were “great” and had “done nothing wrong”, adding that they would be offered enhanced redundancies as well as help with finding other jobs.

“Creating a strong and sustainable Ford business in Europe requires us to make some difficult decisions, including the need to scale our global engine manufacturing footprint to best serve our future vehicle portfolio.

“We are committed to the UK. However, changing customer demand and cost disadvantages, plus an absence of additional engine models for Bridgend going forward, make the plant economically unsustainable in the years ahead.”

At expected volumes the plant also faces a cost disadvantage compared with other Ford facilities building the same engine, said Ford, adding that “significant efforts” to identify new opportunities had not been successful.

A company statement said: “It is proposed that production of the new generation Ford 1.5-litre engine will end at the Bridgend facility in February 2020, with manufacture of the engines supplied to Jaguar Land Rover ceasing in September 2020, when it is proposed that Bridgend will close.

The Bridgend site opened in 1980, covers an area of 60 acres and is one of Wales’s major employers.

The news comes as Honda prepares to shut its Swindon plant in 2021, while fellow Japanese car-maker Nissan reversed a decision to build its new X-Trail vehicle at its Sunderland plant.

Ford also has another engine plant in Dagenham, Essex, and a plant making transmissions in Halewood, Liverpool. – PA