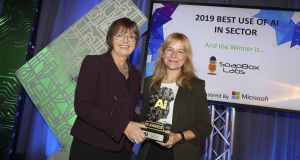 Cathriona Hallahan, managing director of Microsoft Ireland (left) with Niamh Bushnell, chief communications officer at SoapBox Labs which won the 2019 Best Use of AI in Sector for its work on developing speech recognition technology for children. Photograph: Conor McCabe

Cork-based Infant Research Centre scooped an award for the second year in a row, with its work using deep learning to detect neonatal seizures recognised this year. Two-thirds of new-born seizures have no physical signs or symptoms, with detection only possible through analysing electroencephalograms (EEG). Under normal conditions, fewer than 10 per cent of seizures are detected.

The centre’s researchers created an algorithm that can interpret EEG readings at the same level as a human expert. This year’s project takes it a step further, using AI to gain insights into the newborn baby’s brain, and looking at the applications for different gestational ages.

The project was more focused on deep learning, building on what the original project created to create a faster, more lightweight algorithm that needs fewer saved parameters and memory, and so can run on mobile devices such as android tablet.

Speech recognition company Soapbox won the award for best use of AI in a sector for its work on developing technology aimed at children. The Irish company, founded by Dr Patricia Scanlon, has been working on literacy projects for children, allowing software to assess pronunciation and literacy as children read.

Chief communications officer Niamh Bushnell said the award was “a vindication” of its work over the past year. The company expects 2020 to be a big year for it in the educational technology space.

“We think that, in a lot of ways, voice tech for kids is going to end up being bigger than voice tech for adults because, for adults, it is a want but, for kids, it’s a want and a need,” said Bushnell. “You’ve got preliterate kids, you’ve got kids who have special needs, kids who need to use their voice to get access to age appropriate content on smart TVs, for example. The age of voice is dawning but voice will be the interface that kids will use more readily than any other.”

The company recently announced it would work with Florida State University on a ChanZuckerberg Initiative called Reach Every Reader, with Soapbox’s technology chosen to be the assessment tool.

Mastercard Labs won the award for best application of AI in a large enterprise with its Duka Connect project, a mobile point of sale solution for small merchants in emerging markets that uses deep learning to identify hundreds of different products by passing them in front of the handset’s camera.

SAP scooped the award for best use of AI in a consumer/customer service application, and Telenostic’s work on deep learning to predict parasitic infections in animals was named best application of AI in a start-up.

The best application of AI in a student project went to Ciaran O’Mara of University of Limerick for his project that used artificial intelligence for traffic management. ESB’s smart meter technology was recognised as best use of robotics process automation and cognitive.

“The pace of innovation in AI is significant and the AI awards have grown to highlight the bold, creative and scalable approach by Irish companies to AI,” said Cathriona Hallahan, general manager at Microsoft Ireland. “This approach reflects Microsoft’s mission to empower every individual and organisation on the planet to achieve more, and we are committed to achieving this in an ethical, responsible, and transparent way. This year’s winners demonstrate the positive impact that AI can bring to society and to industries like finance, healthcare, and education.”