A US firm is offering incentives to relocate and work remotely. Could it work here? 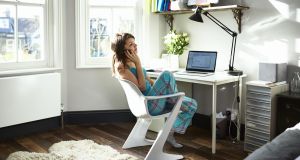 According to MainStreet, employees working remotely avoid the high rents and property prices in San Francisco’s Bay Area, as well as the inevitable long commutes from affordable accommodation to their place of work. Photograph: Getty Images

I was intrigued last week to read the announcement by a new San Jose-based company founded by three ex-Google staff, which is offering to pay $10,000 (€9,000) to each San Francisco Bay Area resident willing to relocate to places such as Salt Lake City or Sacramento.

The premise is that a firm which does not want to pay Silicon Valley salaries can contract with the company, MainStreet, to help find, retain and manage employees who are willing to relocate out of the Bay Area and to then work remotely.

Employees in turn avoid the very high rents and property prices of the Bay Area, as well as the inevitable long commutes from affordable accommodation to their place of work. Employees receive the $10,000 bonus after a year of remote working, and MainStreet also guarantees a stipend of $5,000 per month for up to three months, with continued health care cover, should an employee lose their job and have to seek new employment after relocation.

Given the economy of the greater Dublin area, and the immense pressure on housing, affordable accommodation and commuting, could a similar approach work here? I imagine many people already contemplate whether they could move away from the Dublin area. A cash bonus might be the extra incentive to make the commitment.

Broadband access may perhaps be an issue. Broadband is no longer about Netflix or Amazon streaming, but is as essential to a business as electricity and water. Many parts of the country already have reasonable quality broadband, with some considerably better than in greater Dublin, as I have experienced at my Dublin home compared to a holiday location in Kilmore, Co Wexford.

The Cabinet has just given approval to State funding of the National Broadband Plan. Completion of the NBP should finally provide satisfactory connectivity nationwide.

MainStreet plans to offer co-working hubs away from the Bay Area in which a number of employees, probably from different companies, can share space. Some co-working hubs are already available here, in locations such as Boyle, Co Roscommon, Gorey, Co Wexford, Kilkenny, Sligo and Waterford.

There can generally be a better quality of life, with healthier air quality and environment. Rural and town communities can be reinvigorated as younger generations no longer drift away to major urban centres.

But co-working and home working creates challenges. MainStreet admits concerns about employees feeling isolated when removed from their urban office colleagues, and has indicated it will help companies and their relocated staff to maintain their company’s culture.

Flexible working hours may initially appear attractive, but it may then become harder to unplug from the work environment. Many jobs have already crept into social and home life via mobile devices, messaging and email. Company management should build an ethos which disciplines use of digital work devices out of normal hours.

I recall a decade ago when, as chief executive of a worldwide company, I deliberately placed a new recruit at a desk beside a senior software developer, separated, as was our company norm, by just a half-height partition.

The developer was responsible for launching a new product, and the recruit would help her with support by email to our global customers. Email and instant messaging were also our tools of choice within the company for staff communication.

A few days later the developer confirmed that the launch had gone well, and that she was very pleased with the excellent help which the recruit was providing. However, she said she had not yet met the recruit, and wondered from which of our offices he was working. I have always since pondered whether the physical proximity of an office environment is really necessary.

Today, I collaboratively develop software with a number of colleagues scattered from Tashkent to Seattle. Our company has no physical office, and all of us work from our respective homes. We use the instant messaging tool Slack to communicate.

We can always see who is currently online, and we can initiate a high-quality video call at any time with any combination of our colleagues in our various locations via a simple mouse click. Such video chats tend to be entirely spontaneous and short-lived as needed, rather than formally scheduled as conference calls. It is the digital equivalent of casually dropping by a colleague’s desk in a physical office.

I suspect that tools such as Slack can be effective even amongst staff who are actually within the same office, across multiple rooms and floors. Much office administration, filing, writing, customer support, marketing and sales can be conducted entirely digitally.

If this is the case, then a work culture can be fostered around digital tools, augmented by video calling as and when needed between desks. It then seems but a natural step to gradually dispense with the costs of physical office space, expensive commutes and unnecessary stress.