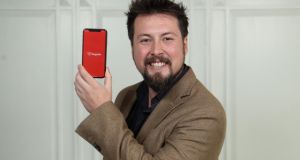 Consumers in the Dublin area may have noticed a new kid on the online grocery shopping block in the last year or so. The Buymie app allows customers to order grocery and household items from Lidl and Tesco and have their shopping delivered in as little as one hour by a personal Buymie shopper who works for them instead of the store.

Founder and chief executive Devan Hughes spotted an inefficiency in the market some years ago. “My background is not in the grocery or FMCG [fast-moving consumer goods] sectors,” he explains. “I had a lot of experience in the energy market in operations and demand side management. Buymie is my fifth business. I had four spectacular failures behind me and in 2014 I got the itch to start out again.”

He says he stumbled upon the grocery e-commerce market. “It is worth €9 billion annually in Britain and Ireland alone,” he points out. “But the retailers involved make €300 million in losses every year because they are subsidising the delivery infrastructure. The distribution model they were using could never work. We have heat and power in our homes because the different services share the same infrastructure. There are nine grocery delivery distribution networks across Britain and Ireland all doing the same thing with a very costly duplication of infrastructure. The principles used for hundreds of years for the distribution of commodities were being ignored.”

This sparked an idea. “It would be much different if they could share a single infrastructure. Look at the demand curve. The market is worth €9 billion now and is forecast to grow to €20 billion in 10 years’ time. If you have a rapidly expanding market with capacity issues you are going to have a correction. That’s economics and was my motivation to move into the space.”

He quit his job and went to work for Salesforce for a year to learn more about the area he was moving into. “In February 2016, exactly one year later, I quit and went full-time as Buymie’s first full-time delivery person,” he says.

“We had 1,800 downloads in the first few weeks,” he recalls. “We started to scale and got a lot of press coverage. The market was in flux at the time. In late 2017 Amazon bought Whole Foods and became a major grocery player. Unilever acquired a stake in the company and became our first corporate investor.”

Eamonn Quinn of the founding Superquinn family also came on board. “It started out as a mentorship relationship and he is now chairman of the company. He understands the pain points we are addressing.”

In late 2018 Lidl became its first corporate partner. “We became the first company in Europe to bring a discount retailer online. We rolled out the service to their 37 stores in Dublin in just three months. We are now in every Lidl and Tesco store in Dublin. Customers choose where they want to shop, select their groceries, check out and pay with the app. The order is placed into the system and our shopper does the rest. It can be delivered in as little as an hour and the vast majority of orders are delivered the same day. That’s where real demand is. With Deliveroo, Just Eats and so on all battling for share of stomach we are helping grocery retailers migrate to the online space.”

There is also an AI dimension. “We call it Jarvis – just another rather intelligent system. It optimises the system by looking at things like weather conditions, traffic, shopper availability and so on, to optimises the delivery route. The shopper can also connect with the customer if products are out of stock or if a replacement is recommended.”

Pricing is set at a competitive point, according to Hughes. “It’s between €3.99 and €6.99 plus between 9 per cent and 14 per cent of the bill depending on spend. Business is really good and the last 12 months have been transformational. Lidl really put us on the map in the last quarter of 2018. The business has grown twentyfold in the last 12 months. Right now, we are investing all earnings back into the business to scale and grow internationally. We have 16 full-time employees and expect to be profitable in the Dublin area within the next 18 months.”