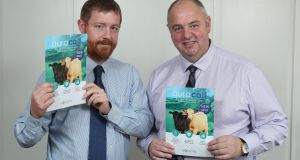 Dublin-based Auranta has developed a range of animal feed additives which boost the immune system, reduce the need for antibiotics, and significantly reduce mortality. Not only do the additives improve the health of new-born and very young animals, they also enhance their performance in terms of weight gain and other key parameters throughout their lives.

The complementary animal feed products are produced from plant extracts and are designed for calves, poultry and pigs, under the AuraCalf, AuraPoultry and AuraShield brands.

Auranta managing director John Cullen explains the innovation by referring to AuraCalf. “What we do is produce animal feed additives,” he says. “Dairy calves are weaned off milk after a couple of days and put on a milk replacer. Using our additives in the replacer boosts the animal’s gut health. The animal’s immune system is developed in the gut and how the animal performs over its life is directly related to the early development of the immune system.

“A dairy calf is hugely dependent on what happens in the first few months of its life,” he adds. “How much milk it will produce is directly related to its health during the first two months. Scour and other infections will decide future performance. There is a lot of research to prove that. Our products are aimed at those first few months and go into very young animals.”

He explains that the microbiome, the bacteria that inhabit the gut, is unique to every animal. “It’s like a fingerprint,” he says. “But when the animal is born there is nothing there. The gut gets colonised after birth.”

It is this period of colonisation during which the microbiome is programmed for life that the Auranta product range targets. “Our additives are a bit like probiotics, but they are not intended to kill anything. They protect the animal by giving a boost to the immune system. Most other products on the market try to mimic medication by killing pathogens in the gut but their ingredients kill good bacteria as well as bad.”

The Auranta products are far more selective, however. They deal with the pathogens while protecting the good bacteria. The mechanism is quite complex but involves action on the gut wall which prevents the pathogens from attaching to it. “We allow them go through and do no harm, but we don’t do anything to stop the production of good bacteria.”

This also helps reduce the use of antibiotics. “There is nothing wrong with antibiotics,” says Cullen. “They are among the greatest discoveries in human history. But they can cause problems if they are overused. New legislation is coming in at the end of 2021 and farmers will not be allowed to use antibiotics to prevent infection or promote growth from them. At the moment, companies like McDonald’s and KFC don’t want antibiotics in the meat they buy.”

Work started on the additives back in 2013. “We had been looking at natural extracts from plants to improve the shelf life of food products and it wasn’t too long before we started to look at nutritional products. We met with animal nutritionists and vets in the Far East and started looking at ideas for the animal feed area in 2014 and 2015. The lightbulb moment for us was when we found we could go in and just deal with the pathogens while keeping as many good bacteria alive as possible.”

That saw the company begin work with Prof Nicolae Corcionivoschi of the Agriculture Food Biotech Institute in Belfast. “He is a global expert in the animal microbiome and through him and our work with a group of Thai vets we started developing and testing products. We then carried out research to show what they were actually doing. Once we had the results we developed a product for use in animals.”

“Business is very good,” says Cullen. “Sales have doubled over the past year. Every penny we make goes back into product development. When we started out, we didn’t have hard data to convince people we weren’t mad. Now that we have that data things are going very well. The calf product will do very well next year and we plan to introduce the poultry [product] in the Far East next year. We have some new products and enhancements in the pipeline, but we are going to stick to the knitting and build on what we have first.”