Bringing Scriba, a smart stylus for mobile devices to market, was a longer and more difficult journey than its inventor David Craig could have imagined 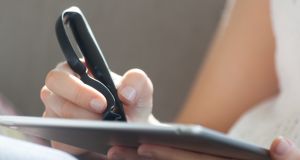 Scriba: Architect David Craig came up with the idea for the stylus in 2014 when struggling to find a product that would enable him to make quick sketches on the go while on site. 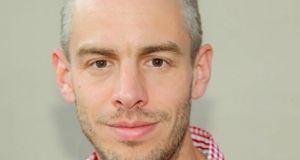 David Craig: “If I’d have known how difficult a journey this was all going to be, I’m not sure I’d have bothered at all but there came a point when I had invested so much into it that I couldn’t not see it through to the end.”

There is a reason why companies usually steer clear of developing connected hardware. Not only is it often a prohibitively expensive project, but it is also a nightmare trying to juggle all the disparate parts, particularly if you’re not an engineer by training. Given this, it is something of a miracle when a product like Scriba manages to get from initial idea to market.

Scriba is an Irish-designed smart stylus for mobile devices that has a unique squeeze motion and many months of battery life.

The product is finally available to the public from next week, considerably later than its inventor originally intended. But as David Craig is the first to admit, it is a case of better late than never.

“If I’d have known how difficult a journey this was all going to be, I’m not sure I’d have bothered at all but there came a point when I had invested so much into it that I couldn’t not see it through to the end,” Craig told The Irish Times.

Dublin Design Studio, the company established by Craig a few years ago to get Scriba to market, launched a successful Kickstarter campaign for a prototype version of the stylus back in July 2015 with the hope that the final model would go on sale a short time later.

As it happens, the route to market took somewhat longer than expected as Craig sought to resolve tricky problems in the manufacturing process, all the while trying to support a growing family on little or no income.

An architect by trade and formerly a partner with Burdon Craig Dunne Henry – winner of the competition to design the ill-fated U2 Tower in Dublin’s Docklands – the entrepreneur came up with the idea for Scriba back in 2014 when struggling to find a product that would enable him to make quick sketches on the go while on site.

The product that eventually emerged is a digital pen that has a unique squeeze motion, which Craig claims completely changes the way people can interact with iPads and other tablets. The pinching action promises a wider range of movement than seen with other styluses, allowing users to adjust line weight, opacity or blurs, more smoothly and precisely.

With a standby charge of more than six months and hundreds of hours of user time, Scriba is also one of the most reliable devices of its type in terms of battery life, according to Craig.

“Scriba actually hasn’t changed that much from the original concept I had but there has been plenty of juggling things as everything that could go wrong did go wrong, from materials not sticking together to broken packaging boxes,” he says.

Given that Craig is going head-to-head with the likes of Apple and Microsoft, which have all come out with their own styluses in the past few years, he had to ensure it was a cut above the rest. This meant using costly materials and calling in plenty of favours.

“There have been so many people who have played a part in getting Scriba to this point, ranging from product designers to software engineers and plastic specialists . . . People who gave their time for free or who helped out in other ways and without them it wouldn’t have happened,” he says.

“When the process started, I was pretty much running away from architecture because everything had dried up with the downturn so there was plenty of incentive to keep me focused on Scriba. There was also a certain amount of guilt after a while after so many other people had put in so much work on it to keep me going,” he adds.

In the end, Craig reckons he has been able to get the finished product developed for a cost of about €250,000, considerably lower than the estimated €1 million or so it would have likely cost him if he hadn’t been able to engage the wider community to give a dig out.

Producing a product such as Scriba has many challenges. Delivering as complex a curved form is particularly difficult as there is no real back to the product. The design for it involves two moulds with hundreds of moving parts. CartaMundi (previously Hasbro), which manufactured and assembled the finished product, described it as one of the hardest projects of its size the company has worked on, says Craig.

“There have been challenges all the way and I did a lot of grunt work because I have had to do whatever I couldn’t farm out but we’ve got there. I’ve effectively not earned much income outside of that I’ve gained from architectural stuff, which has taken off again. There has been some money coming in from things like Enterprise Ireland programmes, and I’ve managed it very frugally because I am Scottish after all,” he says.

“Over the years I’ve also borrowed money from some people but for 2½ years I’ve pretty much worked on this for free. Worse, I’ve been putting in any money I have been able to lay my hands on into the project,” he adds.

In the years leading up to it being completed, Scriba has been picking up prizes everywhere, including in The Irish Times Innovation Awards. The finished product has been accepted on Amazon’s launchpad programme in the UK, providing Dublin Design Studio with a good shopfront. The firm is also selling the product through the Hackett group and via the GetScriba website.

It will retail for an introductory price of £50 as Craig is more focused initially on generating interest and getting feedback on the product from users than making money (although that would also be welcome).

“We’ve been through a couple of hundred prototypes and I’ve essentially spent the last two years or so desrisking the product. But really we are just at the starting line.

“There have been lot of plaudits but at the end of the day I’m still just an architect with a fancy pen. Right now, I’m something of an unknown quantity and we have a need to educate the market as to how Scriba is unlike anything else that is out there,” says Craig.

“I’m busy looking ahead though and there is a possible collaboration with a big Chinese manufacturer and I am thinking about simpler versions of the stylus that could benefit people with carpal tunnel and other ailments. For the next few years though, the focus is all about building a sustainable business,” he adds.