How to shape the entrepreneurs of the future 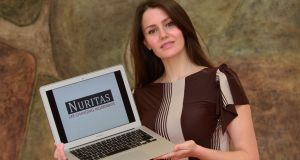 Nora Khaldi: When it came to commercialising her science there was one thing she hadn’t learned – how to be an entrepreneur.

When did you know what you wanted to grow up to be? Most people don’t end up as doctors, firefighters or even super heroes, but some children do end up fulfilling the original plan. Nora Khaldi, founder of Dublin food technology start-up Nuritas, is one of those.

“My teacher was telling us about our parents and the different jobs they had and then she asked us to ask our neighbour what they wanted to do with their life,” explains Khaldi.

Khaldi’s parents had shown her science documentaries from a young age which had ignited the want to be a scientist, and that’s exactly what she became.

When it came to commercialising her science though there was one thing that, even throughout her extensive studies, she hadn’t learned – how to be an entrepreneur.

“I always wanted to commercialise science but I didn’t have the courage or I didn’t know how, and what helped me was this one week of entrepreneurship school that I did in the US and I think this should be mandatory for any post-doc, even a PhD,” she said at the European Institute of Innovation and Technology’s (EIT) Innoveit 2017, in Budapest, Hungary last week.

Educating students at third level, and indeed second level about innovation and entrepreneurship became a hot topic at Innoveit. Discussions over creating a European ecosystem to nurture and grow potential start-ups and those lucky enough to become unicorns (start-ups valued at over a billion dollars) were held at the event.

According to Tibor Navracsics, European Commissioner for Education, Culture, Youth and Sport , Ireland is not far off the mark.

“You have some very good initiatives, for instance you have a label for digital education, I mean for schools who really support digital education. Sport is one of my favourite non-formal education platforms and we have a very good relationship with the Gaelic Athletic Association.

I was present two years ago at the hurling All-Ireland final, how powerful a community it is. You know, in Europe where probably the most painful problem is a lack of powerful communities, these social techniques can be very important.”

While sports do give confidence, team work and a sense of community to young people, EIT are savouring new ways and initiatives that can be rolled out Europe-wide to create a more unified understanding between the education systems. One particular area is for those who have gone before to go back into schools to impart their knowledge, says Navracsics.

“We just met the representatives of the EIT alumni and we are thinking of how to combine, how to give them some funding for going back to school as young researchers, young scientists to tell their stories to the pupils, to motivate them.

“I would call it a role model. I think it’s very important to have tangible role models in science that could be a huge encouragement for young girls as well. That’s definitely one of our policy goals, to increase the numbers and the proportion of the researchers in research society.”

EIT’s interim director Martin Kern spoke about other initiatives that the organisation hopes to expand on and roll-out in Europe such as the use of an educational video game aimed to teach 9-15 year olds “the fundamental concepts of energy with a focus on electricity.”

“One of our innovation communities, InnoEnergy, developed a game that explains the challenges of clean energy and in a playful way, so they are already selling that to some schools,” he said.

EIT is also running a pilot scheme to encourage young women into the technology space, a subject which is already heavily discussed and encouraged in schools, colleges and businesses in Ireland.

“We have here already pilots on women entrepreneurship at the EIT where we take 12 to 18 year old girls and they go at the weekend or out of school to companies which use programmes to teach them digital skills.

The programme teaches basic coding skills to the the participants within a day or two by using the Scratch programme.

“The girls find an environment which is very innovative to them because usually they don’t get to go to companies, (like) Ericsson, Nokia or even Google.

“They have mentors, staff from the companies, who teach them and help them to use this tool and get them interested. They see immediate results so by the end they can do some kind of small sort of programming and that gets them interested in digital skills, technology and innovation.”

Kern recognises that while the EIT is more focused on university level, there is a call for the seeds to be sown further down the education ladder, growing a new ecosystem from grass roots level.

“One of the elements clearly is to also start earlier. To go into secondary level because there, if students are not interested in research and innovation, they don’t get the type of mindset to be creative, innovative and entrepreneurial.

“It is very difficult to start that when you go to university or do a masters or PhD so we see a huge potential that’s driven by how fast the technologies are changing. Today’s skills are not necessarily the ones needed tomorrow. We have to offer skills to students that are more transversal, that are creative, innovative and entrepreneurial.”