The ‘Drone King’ helping to patrol the skies for Irish authorities 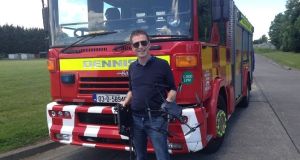 Drone consultant Ian Kiely’s clients vary from the Dublin Fire Brigade, to which he demonstrated how a drone with thermal cameras could fly over a fire and find the the hottest point, to the Garda and Leinster Rugby Club

From a location in Grand Canal Dock, the customised Yuneec Typhoon H drone ascends quickly to a height of about 60m (200ft) and begins scouring for signs of teenage gangs stockpiling tyres and pallets ahead of Halloween.

Ian Kiely guides the unmanned craft, which weighs about 2kg and costs €2,000, over Sherriff Street Lower and towards the Docklands train station.

He nudges the controls and the drone swoops over the Royal Canal to Blythe Avenue, where a large stack of tyres is spotted lying against a wall.

Dublin City Council employees scramble on to the scene and remove half of the tyres before a gang arrives and begins rolling them to a new location. Suddenly, gardaí appear to accost the teenagers and confiscate the remaining tyres.

The council have hired Mr Kiely, a leading drone consultant, to comb derelict buildings, roofs, fields, canals and the tops of railway bridges. Mr Kiely co-ordinates with the Garda, Dublin Fire Brigade, the general public and other State agencies like Irish Rail, to thwart the gangs of teenagers ahead of bonfire night, which costs the capital several million euros a year in damages.

“We have now been booked every morning this week to search,” Mr Kiely tells The Irish Times. “In some instances, we will give support to the ground crews while they snatch the materials. We often come across the kids, then we lose them and realise they had been hiding from the drone and are moving the materials to where we had already searched.”

Mr Kiely (40) is an unlikely poster-boy for the drone industry. A native of Killiney, he started out in hotel management and worked for hotelier Francis Brennan before opening his own cafe and catering company.

A serious accident left him bed-ridden for a year and led to his business closing. Ian McMahon, a photographer with a chain of Fuji stores and future business partner, introduced him to drones and he got a licence.

A €2,500 grant from the Department of Social Protection and a Back To Work Enterprise Allowance worth €180 a week helped Mr Kiely get on his feet before he found partners and investment to set up Drone Consultants Ireland, along with Mr McMahon and another entrepreneur, Peter Downey. A friend’s father kicked in €15,000 and Mr Kiely went looking for clients.

“Within a week of qualifying as a drone pilot, I went to the first meeting of the Unmanned Aircraft Association of Ireland held at Weston Airport in August 2015, which was attended by the Minister of Transport, the Navy and the head of IAA [Irish Aviation Authority],” says Mr Kiely.

“So many people had heard about it on the news that the place was overwhelmed. I thought I used to be a hotel manager and nobody is running an event so let’s do an expo.”

“In the beginning everyone laughed at us and then we went from zero to having 1,500 people show up over one weekend,” he says. “It launched us into the drone world and we started building relationships with the guys who trained us because we had business experience and they didn’t.”

Mr Kiely’s first client was the radio station 98FM, which now pays Mr Kiely for covering events such as its annual Big Slide Home festival in Dublin’s city centre. “I went through the newspapers looking for companies doing interesting events,” he says. “Initially, I provided them with free drones and clients started paying for them once they saw the great coverage in the press.”

Putting on Drone Expo lent his company credibility among the emergency services. The Dublin Fire Brigade invited Mr Kiely to bring a drone with thermal cameras to their training centre.

The Fire Brigade recommended Mr Kiely’s firm to the council and the Garda, who worked with Mr Kiely and the Emergency Response Unit on “a mock Isis terror attack” in July at Dublin’s International Financial Services Centre.

“It was a hostage station with multiple stabbings and police using blank rounds and stun grenades,” says Mr Kiely. “We only got briefed the night before and we were providing aerial coverage showing the commissioner what could be observed during the attack.”

The Garda are now believed to be setting up a drone unit and Mr Kiely has been hired to give their trained pilots operational experience.

“They were filming lineouts and scrums from fixed positions and they found they weren’t capturing enough so we brought out drones to the RDS to a training day. “They wanted to see everyone’s motion and reaction when the ball is delivered while a camera at the front was only catching the melee at the front.”

From their origins in filming weddings and festivals, drones are now invading virtually every sphere of life. Inquiries have come in from all walks of life – some good, some a little far-fetched but in general mostly workable situations.

Mr Kiely and his team work with heavy industry, builders, engineers, farmers, fishermen, the horseracing industry and the rock band Kodaline, who wanted to be filmed racing electric skateboards.

“Large industries didn’t take us seriously 18 months ago,” he says. “We can map 20 acres in an hour when it used to take six weeks.

“Some of the stuff I would have considered futuristic is no longer futuristic. You now have drones that can fly in virtually all weathers on a tether for up to 500 hours.”

Despite his firm being “marginally” profitable, Mr Kiely admits revenues are still “piece-meal” because they haven’t yet fully explored the full potential of drones with their clients.

Mr Kiely provides consultancy services and, as a distributor, takes commissions on the sale of Chinese drones in Ireland worth up to €10,000. His firm just missed out on a €113,000 contract with the Army, which recently bought a fleet of spy drones from an Israeli company for €1.9 million.

Mr Kiely and his partners are far from having the market in Ireland to themselves with commercial drone use having expanded to over 150 companies. Some operators are focusing on photography and mapping whereas Mr Kiely ultimately hopes to capitalise on the move by drones to take over deliveries.

Companies like Amazon and UPS are already testing drone deliveries from drones mounted on trucks. In February this year, Pony Express Couriers said it had completed Ireland’s first authorised drone delivery, using a drone to drop emergency supplies to a boat off the Dublin coast.

Mr Kiely drones on so much about how unmanned aircraft are transforming modern life that his friends have banned him from mentioning the word. His ex-girlfriend mockingly gifted him with a mug emblazoned with the words “Drone King” because of his obsession.

“I keep it in a box in my office and show it to other drone guys,” he says. “They laugh and ask me if I think I am that. I tell them no because I haven’t even started yet.”