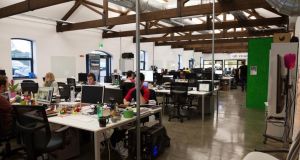 The PorterShed opened its doors in May 2016 and has become home to 30 fast-growing tech companies.

An abandoned Guinness storehouse scattered with pigeon droppings, broken office furniture and the detritus of its old brewing connections might not seem like the ideal location for a shiny new innovation hub focused on boosting Galway city’s technology ecosystem. However, that’s exactly how the now bustling PorterShed started life just over a year ago.

The PorterShed opened its doors in May 2016 and 18 months later has become home to 30 fast-growing tech companies and to an accelerator run by the National Digital Research Centre (NDRC). In addition the facility, which is part of the Galway City Innovation District, runs an intensive programme of business and cultural events, provides opportunities for like-minded techies to mix and has become a “must visit” for foreign direct investment (FDI) companies running their slide rule over the west of Ireland.

What makes the PorterShed project remarkable is the speed with which this collaborative space evolved. From concept to official opening took just seven months proving that where there’s a will there’s a way, especially when you have determined promoters that can persuade heavyweights such as AIB, KPMG and IBM to jump on board.

There is no shortage of tech companies in Galway, especially in the medical devices sector. The region is one of five global medtech hubs and the producer of 80 per cent of the world’s stents. This competence combined with the considerable ICT skills found in the area (also mainly through FDI companies) has created a cohort of people with bright ideas keen to strike out on their own.

The problem was they didn’t have anywhere to go within Galway city that gave them space, support, and the buzz of being part of a vibrant, entrepreneurial community. Units in industrial estates simply don’t cut it with today’s start-up generation, which wants the energy of being with like-minded people and the stimulation of peer-to-peer interaction within walking or biking distance of downtown.

Maurice O’Gorman, president of the Galway Chamber of Commerce and chairman of the Galway City Innovation District, is one of the prime movers behind the PorterShed project. A former international investment banker, he knew from experience that the most successful tech hubs were located in innovation districts within cities, not in business parks.

“A group of us from a mix of academic, financial, entrepreneurial and business backgrounds came together with the purpose of developing a city-based co-working space where innovation-driven companies whose goal was to go global could base themselves,” he said.

“From the outset the facility was aimed at ambitious businesses focused on growth and scale – not lifestyle entrepreneurs. We literally walked around Galway city looking at buildings and at the back of Ceannt station near Eyre Square we found the very run-down former Guinness storehouse. We negotiated a lease (backed by the Chamber of Commerce) for the 7,500sq ft premises from CIÉ and set up a not-for-profit company to raise the money to refurbish it.”

Refurbishment cost about €450,000 and was funded mainly by corporate sponsorship and support from Enterprise Ireland. However, this was only part one of the investment. Part two, another €750,000, was needed to put what the founders saw as the second essential piece of the jigsaw in place – an accelerator that would support next-generation entrepreneurs.

Following a tender process, the contract for the accelerator was awarded to the NDRC and Enterprise Ireland provided matching funding to bring the investment to €1.5 million. This will support up to 30 new ventures over the next two years. The first group of 10 have already started the programme.

“We have always invested in companies from around Ireland, but were somewhat limited by the fact that we were Dublin-based and they had to come to us. This is the first regional accelerator backed by Enterprise Ireland and it allows us to expand our physical footprint and to reach more potential entrepreneurs,” says Gary Leyden, commercial director of the NDRC.

The PorterShed is not an incubator. It is a working space and showcase for tech companies that are already up and running and they pay €220 a month to be there. Apart from desk space, they also get access to events, business-related workshops and to informal support from members of the centre’s highly experienced (voluntary) board.

The promoters are hoping overseas entrepreneurs will also be attracted by this Silicon Valley-like mindset on the west coast of Ireland. “We want to be seen as a great place to be an entrepreneur no matter where you’re from,” O’Gorman says.

Mary Rodgers, a former vice-president with Credit Suisse in New York, runs day-to-day operations at the PorterShed. “Some of our companies have scaled so quickly that they have already moved on but we have 30 companies here now with around 86 people employed between them and we always keep a few ‘hot’ desks free so we can take new arrivals. The average salary of those employed in PorterShed companies is €64,000 and this has added over €5.5 million to the local economy,” she says.

“What’s really key is the peer-to-peer networking,” she adds. “People tell us they can have a conversation with someone working a few desks away and have a problem solved there and then. Where you get techies hanging out together in the kitchen it becomes a real melting pot of ideas with very productive interactions. If you’re in there getting a coffee you can zone in on the random conversations going on and they often turn out to be very helpful. So far we have hosted over 300 formal events and had over 3,000 visitors through the doors in 18 months and ultimately we hope to see a return in the form of long-term, high-quality jobs for Galway.”

With the PorterShed now up and running, ambitious plans are being hatched for a phase two. “We have put in an application to Enterprise Ireland for funding to lease the Stables, another 22,000sq ft of space which we know we can fill very quickly,” Maurice O’Gorman says.

“Building out our innovation district is very important for future investment in the region,” he continues. “The IDA already brings potential FDI companies to the PorterShed because they want to see innovation in action. They want to know there are boots on the ground and to be able to see and touch these companies, not least because many bigger companies are now growing by acquisition.

“We also provide FDI companies with a ‘landing spot’ when they arrive. For example, SiteMinder started here with two people, they left when that got to 16 and they now employ over 100. Our aim is to have a fully connected ecosystem with porous boundaries, by which I mean we want as many people as possible to come through our doors, from TY students to FDI visitors and everyone in between with an interest in what we’re doing.”