New Innovator: Off the Cuffe 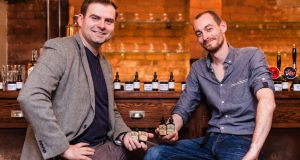 Jarrod Cuffe (left) and Barry Gargan, co-founders of Off the Cuffe bitters

Angostura bitters started out as a stomach remedy almost 200 years ago, but this rum-based mixture quickly went into general use to flavour drinks and has been an essential cocktail ingredient ever since. Angostura bitters may be a venerable brand, but this has not deterred Irish start-up, Off the Cuffe, from taking aim at its patch with a new range of Irish whiskey-based bitters.

“Bitters are to drink what seasoning is to food,” says former chef Jarrod Cuffe who co-founded the company with Barry Gargan in 2016. It began trading in July of this year and currently has two products: Aromatic Hedgerow Bitters and Marmalade Citrus Bitters.

“Bitters is made up of a mixture of tinctures and added to beverages to promote appetite or digestion and to amplify flavour. It is made by using a wash from a high ABV (alcohol by volume) spirit to extract all the essential flavours from a range of different botanicals,” says Cuffe. “In our case, this involves a list of 23 including dandelion, juniper and elderflower. What makes our products different is that they are made using Irish whiskey new-make [spirit just off the still] not [cheaper] grain neutral spirits as is often the case.

“In addition, we use organic botanicals and make our product by blending individual tinctures rather than the more usual ‘teabag’ method where all the herbs are macerated at the same time.”

The idea for Off the Cuffe was born at the Irish Craft Cocktail awards where Cuffe and Gargan met for the first time. “A discussion about purity of flavour and the high-quality spirits coming out of Dublin followed and led us to the conclusion that we should work together to produce artisan bitters,” Cuffe says.

Australian-born Cuffe moved to Europe in 2006 and to Dublin in 2014 to run an events company specialising in cocktails. Gargan has been a bartender since his teens and has always been into making things, from syrups and infusions to liqueurs and even his own toothpaste.

The company is based at the Chocolate Factory in Dublin and its whiskey new-make comes from the Teeling Whiskey Distillery.

“We decided to sell the bitters in a 50ml bottle to get around the classic problem of the lone bottle of bitters gathering dust on the bar, while the higher ABV (50 per cent) offers greater purity of flavour and value for money,” Cuffe says. “The product sells at €13.50 and we are targeting a broad audience from the on-trade to destination cocktail bars, pubs, independent retailers and individual consumers who want to add a point of difference to their home bar.

“We are currently building our domestic base but have plans to start exporting next year. Our marketing strategy is a combination of online advertising, social media, consumer and trade workshops, partnering with the right distributors and promoting advocacy among top bartenders around the world.”

Cuffe is currently participating in the Enterprise Ireland-funded New Frontiers programme at the Synergy Centre at Tallaght IT. Costs to date have been in the order of €35,000 and self-funded.

The business is now generating income and, while the founders are currently doing everything themselves – from making the product to bottling and delivering it – they are hoping to take on staff in 2018. They are also planning to launch a new flavour every six months for the next three years.

“We hope our approach gets people thinking about why other producers don’t use high-quality spirits and a more artisan production method as a matter of course. We also list all ingredients and challenge others to do the same. We don’t hold with ‘secret’ recipes,” Cuffe says. “The global boom in cocktails has led to a renewed interest in both the drinking and dashing bitters categories so we think our timing is spot on.”