The message to bankers, business people and high-rolling investors was clear – the once-insular kingdom is now open for business 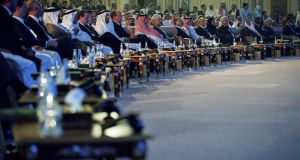 More than 3,500 private-equity investors, corporate chief executives, heads of global organisations and government officials from dozens of countries flocked to this week’s conference 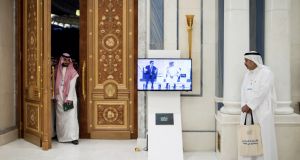 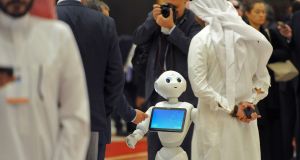 A Saudi man chats with a robot on the sidelines of the three-day Future Investment Initiatives conference in Riyadh. Photograph: AFP/Getty Images 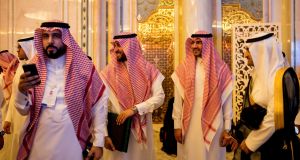 Saudi Arabia threw an economic coming-out party of sorts last week, hawking its efforts to liberalise its conservative society and diversify its economy in a sweeping overhaul of the way the wealthy Arab kingdom has long operated.

In a glittering conference centre in Riyadh, slick videos promised a gleaming, $500 billion (€431bn) city of the future, powered by solar energy and run by robots. The crown prince lauded a “moderate Islam” that embraces the world. And members of the global business elite attended standing-room-only sessions on sustainable energy and the future of urbanisation.

The message to bankers, business people and high-rolling investors was clear: The once-insular kingdom is now open for business.

“Today we have a people who are convinced that by working very strongly together, Saudi Arabia and all of its projects and programs can reach new horizons in the world,” Crown Prince Mohammed bin Salman said at the conference.

But despite the royal rollout, including a lavish dinner with sushi, lamb and overflowing trays of chocolate truffles, the prince’s grand plans have proceeded haltingly.

The government, in an effort led by the 32-year-old crown prince, has made some remarkable social changes recently, including promising women the right to drive and curtailing the powers of the religious police. But it has so far failed to make much progress on transforming the kingdom from a petro-state into a diverse, productive economy capable of growth at a time of cheap oil.

It remains unclear to what extent top-down decrees and dramatic announcements will spur meaningful change in a society long characterised by deep religious conservatism and heavy dependence on the state.

Still, many people are taking the new push more seriously than previous efforts. More than 3,500 private-equity investors, corporate chief executives, heads of global organisations and government officials from dozens of countries flocked to this week’s conference, making Riyadh a who’s who of international business leaders studying the kingdom’s money-making prospects.

Historically, the country’s vast oil reserves, estimated at one-fifth of the world’s total, made the Saudi government the primary engine of the economy. The state employed most working Saudis and financed elaborate projects, meaning that even the private sector depended heavily on government spending.

But the drop in oil prices has undermined that model, shrinking the state budget at a time when hundreds of thousands of young Saudis are entering the job market every year. Growth has slowed drastically, large projects have been suspended and unemployment is a growing concern.

To address these challenges, Prince Mohammed has proposed a range of changes under the banner of Saudi Vision 2030 that would once have been unthinkable: increasing the number of Saudis in private employment, including women; soliciting foreign investment; and selling shares of Saudi Arabian Oil Co, the state oil monopoly, to raise capital to invest elsewhere.

The breadth of the proposals has created a rare sense of dynamism among Saudi watchers.

“The crown prince is a change agent on a very big scale, and this conference is a very big signal about how rapid is the pace of change, and that it is really happening,” Daniel Yergin, a prominent energy strategist who attended the conference, wrote in an email. “This is driven by the recognition that an economic model based largely on oil, which worked for four decades, is no longer sufficient when 70 per cent of the population is 30 years or younger, oil prices are volatile and the world is going digital.”

But the obstacles to economic change are many, starting with a culture that often discourages risk-taking and innovation.

With the government cutting costs, Saudis who could once count on secure state jobs must now compete for more demanding ones in the private sector. Moves to undo generous subsidies or reduce the number of foreign workers could destroy businesses reliant on such perks.

Increased transparency could deprive members of the royal family their control over lucrative pieces of the economy. And even middle-class Saudis have grown used to subsidised energy, making them vulnerable to changes to the system.

After the government tried to cut bonuses for its employees, it caused such widespread grumbling and a drop in spending that in April King Salman backed down, restoring the perks.

An increase in water prices was quickly reversed after similar complaints, although higher fuel prices and some so-called sin taxes on sugary drinks and other items appear to have stuck.

Despite reports to the contrary, the government insists that it will hold the initial public offering for stock in Saudi Aramco next year, although much about the move remains unclear.

“Prince Mohammed has shown he can make bold moves on the social front,” said Kristian Coates Ulrichsen, a fellow for the Middle East at Rice University’s Baker Institute for Public Policy. “He needs now to move that focus away from the social aspects to the vested economic interests, which otherwise could hold back or possibly reverse some of the hoped-for changes.”

For Saudi Arabia to thrive in an era of cheap oil, more Saudis will need to work for private companies, and Prince Mohammed has spoken about moving young Saudis into new industries and helping them become entrepreneurs.

But the number of Saudis in such jobs remains small. Most working Saudis are employed by the government, and private companies rely heavily on foreign workers. Foreigners make up about a third of Saudi Arabia’s population of 31 million, and most are labourers who do jobs many Saudis would avoid for wages they would not accept.

The Saudi government has tried to push more citizens into private-sector jobs. But true labour reform will come only through measures like reducing the number of visas for foreign workers or forcing employers to pay salaries Saudis will accept, said Jean-François Seznec, a senior fellow at the Global Energy Centre at the Atlantic Council.

“The private sector will want to make the profits, but will they accept to work with Saudis and not just hire a bunch of foreigners for one-fifth the price?” he said. “I am not sure that is going to happen just yet.”

The primary engine of the proposed economic transformation, and the sponsor of this week’s conference, is the Public Investment Fund, which invests in both Saudi and foreign entities and has recently announced a series of multimillion- and billion-dollar initiatives.

These include investments in energy efficiency, dairy, entertainment and waste management companies; a fund to support small and medium-size businesses; and other investments in infrastructure, technology and the ride-hailing company Uber.

The pledging of so much money has piqued the interest of international investors in Riyadh this week.

“This country can pull off whatever it wants to pull off,” Mary Callahan Erdoes, the chief executive of JPMorgan Chase’s asset and wealth management division, said Monday evening, before the investment conference began in earnest.

The kingdom’s reform push remains tightly linked to Prince Mohammed, who is seen by many as the kingdom’s de facto ruler, with the blessing of his elderly father, King Salman.

After failing to appear as planned to open the conference Tuesday morning, he unveiled an ambitious plan in the afternoon to create a new city from scratch on Saudi Arabia’s Red Sea coast that would rely on renewable energy and be staffed largely by robots.

The project, Neom, would cost $500 billion and seek to create “a leading global hub that exemplifies the future of human civilization by offering its inhabitants an idyllic lifestyle combined with exceptional economic prospects,” according to promotional materials distributed by the Royal Court.

“It’s head-spinning in its ambition,” wrote Yergin, the energy strategist. “This is taking on a very big challenge that will be measured not in decades, but over a generation.”