Can Irish tech firm born ‘in the cloud’ save regular taxi industry from extinction? 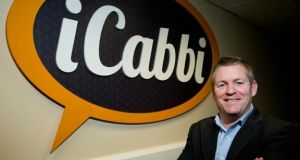 In 2009, having still been no more than a glint in chief executive and founder Gavan Walsh’s eye, the concept for iCabbi was born.

In season six of American comedy series Portlandia, one poignant sketch follows a woman ordering a taxi cab in an attempt to avoid a surge in ride-sharing prices.

After waiting 45 minutes the taxi finally arrives, but the driver isn’t familiar with the passenger’s requested destination so uses her old school radio system to contact dispatch.

At HQ the radio dispatch operator attempts to find the location on a map made from, of all things, paper! The fare is exorbitantly high, the driver only takes cash and has no change for a $50 note – yada yada yada.

Ok, it’s totally over the top, but does highlight some of the challenges faced by the taxi industry when compared with cheaper, faster and more efficient ride-sharing systems (with the exception, of course, being during high demand surge pricing periods).

ICabbi, a Dublin based firm developing booking and dispatch software for the Taxi and Private Hire industry aims to make sure there will continue to be demand for traditional taxi services.

Its technology platform aims to deliver a superior experience for call takers, controllers, drivers and passengers. iCabbi is also an example of a company born and raised in the cloud, providing cloud-based taxi dispatch solutions.

Back in 2009, having still been no more than a glint in chief executive and founder Gavan Walsh’s eye, the concept for iCabbi was born in less than favourable conditions.

While on holidays in Portugal with his then-pregnant girlfriend, they left their hotel to go for a long walk. “[We] soon found ourselves lost in a remote area and unable to find our way back. It got me thinking that there had to be a way to use technology and your smartphone to identify where the nearest taxis were and to be able to book one of them directly without having to speak to anyone,” he stated in a previous interview.

Bulky radio dispatch systems, heavily reliant on hardware that became obsolete in less time than it used to take to find a cab in Dublin on a rainy Saturday night, was still the norm less than a decade ago. The iCabbi system offers taxi firms “access to the most advanced cloud-based dispatch system in the world by using its SAAS (Software As A Service) model. Companies no longer require expensive hardware or even software installations and can access everything they need via a simple browser.”

One of their first clients was VIP Taxis in Dublin, who found themselves in precipitous need of a waterproof taxi dispatch system, which ironically, they found in the cloud. “They came to us after their office in Dublin was flooded,” explains Ian McDonald, business development executive at iCabbi.

“A shower had been left running in an apartment above leading to the bathtub to fall through the ceiling directly onto their servers beneath, taking down the entire operation.”

VIP Taxis are still high and dry but their adoption of iCabbi proved to be the catalyst for the cloud-based startup to snap up a large portion of the Irish market, about 70 per cent nationwide in total.

The Dublin-based firm currently now operates in four markets – Ireland, the UK, US and Canada – with over 500 companies signing up in the last two years alone, bringing the total number of vehicles using the iCabbi system to 65,000 worldwide. This progress hasn’t gone unnoticed. They took home an Oracle Excellence Award this year for Innovation with Enterprise Analytics following the deployment of OAC (Oracle Analytics Cloud).

Competition in the increasingly diverse taxi industry is underpinned by two fundamental economic determinants: cost and efficiency. Ultimately, most consumers will choose a taxi service based on the lowest fare prices and how fast and straightforward it is to secure a ride.

The growth of B2C systems, such as Hailo, which connect consumers directly with individual taxi drivers, not to mention ride-sharing systems such as Uber and Lyft, have left many wondering whether there is still a place for traditional taxi service companies with a physical HQ using a dispatch system.

While iCabbi and other technologies are improving efficiencies in terms of taxi dispatch, ways still need to be found to drive costs down to a level on a par with ride-sharing.

McDonald and Co aren’t in a position to directly impact taxi fares but believe it is unwise to write off traditional taxi services as a relic of the past just yet. “That’s a perception, and every market is very different,” he says.

“The US industry is changing with the growth of the gig economy - Uber and Lyft etc. But they’ve got one kind of customer - the app-savvy customer. A taxi company has many different customers.

Not only do they have app-savvy customers going to the airport for a business flight, but they also have the old lady who wants to go to the shops in the afternoon, or the local hospital who needs a patient to come in for dialysis or chemotherapy.”

Of course, says McDonald, being on a cloud-based platform means lower overheads that could be passed onto the consumer.