A quiet revolution in health tech

‘We are a volunteer-led community that wants to inspire, champion, celebrate and enable under-represented groups within healthcare’ 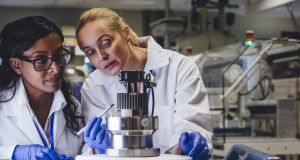 Collaboration is central at One Health Tech

When we talk about a revolution in healthcare, it is always assumed it is driven exclusively by “game changing” or “disruptive’ technologies – that are presumably magically implemented and accepted overnight. But the wake-up call is ensuring healthcare staff (and patients) feel comfortable with these technologies and find them of use. This is only achieved through a quiet revolution.

Michelle Kearns and Maria O’Loughlin have started a quiet revolution of their own with OneHealth Tech Ireland – a community designed to inject the networking-focused and mentor-driven attitude of tech start-ups into Irish healthcare while promoting inclusivity in IT, a sector that can benefit from more women and people from diverse backgrounds.

Kearns, chief information officer of Carlow-based out-of-hours medical service, Caredoc, is the co-founder and director of OneHealth Tech (OHT) Ireland. She was inspired while at a conference in the UK: “I spotted an event promoting women in health technology. The panel featured women at different stages of their careers occupying a variety of roles. It was the first time I’d ever seen an all-female panel promoting women in leadership positions in this sector. And they were so welcoming.”

After attending, Kearns began wondering why there weren’t more events like this in Ireland, prompting her to approach organiser and OneHealth Tech UK founder Maxine Macintosh and get the ball rolling. Back home, she and Maria O’Loughlin started making plans for a sister community here in Ireland.

“And it’s not just about women,” says O’Loughlin, co-founder and an adviser with eHealth Ireland. “Of course, we want to mentor and support women but myself and Michelle want to include all genders, and not just those from health or technology backgrounds either. We want people who have a different, fresh perspective that can feed into better health technology for everyone.”

OHT’s aim is to run events where anyone can feel comfortable with attending and feeling like they have something to contribute, says Kearns, noting that when it is anything to do with collaborating on technology-related projects, people often think “I can’t code, I shouldn’t be here”.

“We see with hackathons for example, women will tell us they are afraid to go in case they’re the only one there. Or people will avoid it for fear they won’t be good enough. They assume hackathons are only for men who code,” she explains.

One thing OHT UK started, and which Kearns and O’Loughlin plan to replicate, is run what they call a so-called “collaborathon”. Technical or clinical skills are welcome but not necessary. Everyone from doctors and patients to coders and creative types turned up.

“We are a volunteer-led community that wants to inspire, champion, celebrate and enable under-represented groups within healthcare. The aim is to bring clinicians, non-techies, techies, and just people with great ideas together as well as companies small and large,” explains Kearns.

“We want to reach pretty much everyone who has a voice and provide them with a way to speak their mind about health technology and have a say in how it could develop in the future.”

Kearns says the sheer amount of interest in OHT Ireland has been very encouraging: “We have many clinicians and IT professionals (women and men) who have contacted us already and they’re interested in attending events all around the country.

She says they were also “shocked and delighted” by the number of people outside of health who have been in contact: people across banking, retail, automation, customer service, and other sectors that have an interest in health and want to get involved.

So, what next? The official launch was just over a week ago but they’re already planning to run workshops, mentorship sessions, conferences, free training days, while, importantly, planning to facilitate companies who are recruiting and want to ensure they are being as diverse as possible in the hiring process.

“Our events are free to join, friendly, non-hierarchical and we give people the opportunity to speak, raise their profiles, meet influencers, all which helps create amazing friendships and build support networks,” adds Kearns.

“Often the magic happens over a glass of wine at the end of an event: that’s when back-of-the napkin ad-hoc collaborations happen.”