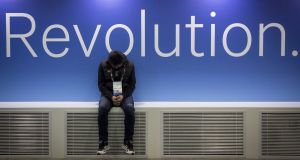 The Mobile World Congress in Barcelona will provide another clue of how our 5G future will look. File photograph: Miquel Llop/NurPhoto via Getty Images

More than 100,000 delegates from the world of telecoms will gather in Barcelona next week for the Mobile World Congress.

Undoubtedly 5G (5th generation wireless) will be the hottest topic on the agenda and mobile operators, smartphone manufacturers and equipment suppliers will be eager to demonstrate there is substance behind all the hype.

The completion of the first set of 5G standards has been a significant milestone since last year’s gathering, providing a clearer idea of the boundary separating marketing buzz and commercial reality.

It is easy to understand why there has been so much hype about 5G as it effectively promises another technological revolution: data rates 100 times faster than 4G; a thousand-fold increase in mobile network capacity along with a hundred-fold increase in the number of connected devices supported by the network; and response times – critical for the success of innovations such as driverless cars – of less than one millisecond.

Whatever about the plans for the National Broadband Plan, this technological leap will require massive infrastructure investment. The infrastructure demands will be significant: rough estimates show that between 100 and 1,000 5G radio units will be needed per square kilometre.

To put this in perspective: the number of sites required will be an order of magnitude greater than the number of conventional radio units owned by a single operator in the Republic. This also means new locations such as lamp-posts and other public infrastructure will have to be identified to house these units which are likely to be the size of a home-wifi access point.

Keep a close eye on what will be announced at next week’s events in Barcelona. It will provide another clue of how our 5G future will look

A simple linear extrapolation of the investment costs associated with previous network generations predicts that capital expenditures of at least €56 billion will be necessary EU-wide by 2020, but this is likely to be a conservative figure as 5G promises to be much more than just an extension of previous generations.

The key to unlocking the performance supremacy of 5G lies in the new spectrum bands. Already, the State has auctioned 350 MHz of spectrum at 3.6 GHz, divided among five bidders. This frequency has been harmonised internationally to provide broadband coverage support for stand-alone 5G roll-outs.

However, it is the new millimetre-wave spectrum bands around and above 30 GHz that will unleash the multi-gigabit per second speeds. While spectrum is limited at frequencies currently licensed to mobile carriers, these bands offer large swathes of readily available spectrum.

At frequencies above 30 GHz, however, electromagnetic signals suffer from significant absorption by both the atmosphere and physical objects. While the technologies that overcome this challenge are at an advanced stage of development, bulletproof solutions have yet to be implemented.

Whether the Republic will be an early adopter of 5G may depend on our LTE coverage. The first completed 5G standard makes it clear that early 5G roll-outs will boost data speeds locally, but service availability will still rely on LTE. New network features such as low latency communications are expected to trickle down to LTE, making the relationship between the two technologies even stronger.

Moreover, the Mobile Phone and Broadband Taskforce, established as part of the National Broadband Plan, together with the Commission for Communications Regulation (ComReg), are already collaborating with local communities and Irish operators to address service quality issues and identify new site locations. So, if LTE is crucial to the successful roll-out of 5G, the Republic is ready and able, with major Irish operators planning to launch their first 5G services within the next two years, just as new smartphones enter the market.

The new generation is a technological disruption that will help to make transportation safer, offer better health services, and facilitate greater energy efficiency. But after years of economic downturn, it is also a much needed opportunity to transform industry and create new jobs.

The EU-commissioned report Identification and quantification of socio-economic data to support strategic planning for the introduction of 5G in Europe, with Connect as one of the contributors, estimates that by 2025, 5G will bring €62.5 billion per annum in benefits across four specialised industries of automotive, healthcare, transport and utilities.

Another €50 billion per annum in social benefits is expected through enhanced productivity, extensive use of data, and the bridging of the digital divide gap. It should come as no surprise then that governments worldwide are seeking ways to speed up its inception: the European Commission has already committed to spending €200 million on the trials of 5G specialised technologies; the UK government has committed £160 million (€181m) to run 5G trials and testbeds; and the White House’s National Security Strategy lists 5G as one of the critical infrastructures for long-term development of the US.

Keep a close eye on what will be announced at next week’s events in Barcelona. It will provide another clue of how our 5G future will look.