Up, up and away: State to develop strategy for space enterprise 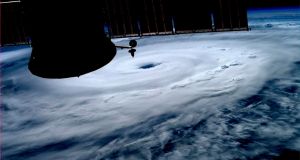 The eye of Hurricane Arthur is seen over the Atlantic in this photo from the International Space Station. Photograph: Reuters

A new strategy to set out how the Republic can maximise the benefit of its investment in the European Space Agency (ESA) and the EU’s flagship space programmes is to be developed by the Government.

Minister of State for Training, Skills, Innovation, Research and Development John Halligan announced the formation of the strategy at the headquarters of technology company InnaLabs in Blanchardstown, Co Dublin, on Monday.

A steering group will be established in the coming weeks to oversee its development. This will include a consultation process to seek views from interested parties on how the Republic can best exploit opportunities in the space enterprise sector.

“The space sector is undergoing a significant and rapid transformation,” said Mr Halligan. “It’s evolving from a sector where activities are funded purely by governments to one that relies more on private investments to fund commercial activities.

“More than 60 Irish companies are currently benefiting from contracts with ESA, with five new companies expected to enter the sector each year between now and 2020.

“The strategy will also seek to identify and explore potential synergies with other sectors, such as ICT and aerospace.”

InnaLabs has secured a €2.6 million contract with the ESA less than a year after it received a near €1 million deal with the same organisation.

The company, which was established in 2011, develops and manufactures highly-complex navigation aids known as inertial sensors for a broad range of applications that also include air transportation, rail, autonomous vehicles, marine, and civil engineering.

The steering group for the space strategy will set out details about the process for producing the strategy when it meets in the coming weeks.