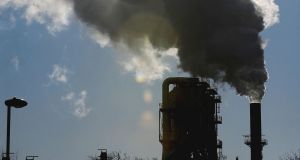 The idea of global warming was developed by the Irish scientist and Carlow man, John Tyndall (1820-93). Photograph: Owen Humphreys/PA Wire

Is the world ever going to get on top of global carbon dioxide releases? One despairs when you see those images of giant smoke stacks with what looks like pollution – but what is sometimes only process steam – billowing into the atmosphere. The Paris agreement in 2015 is meant to mark a turning point with countries large and small around the world finally co-operating to help rein in CO2 emissions and beginning to put the brakes on global warming.

Just in case you don’t know what global warming or climate change is, it is the alteration of the planet Earth’s climate systems caused by the release of carbon dioxide as a result of human activity. Collectively since the industrial revolution we have been burning more and more fossil and other carbon-based fuels to run our factories, power our cars and heat our homes.

We have been struggling with carbon release limits imposed by the EU over the past decade, and are not achieving them

The carbon dioxide had nowhere to go but up and for the past 200-plus years we have been adding more and more CO2 to the atmosphere. And as the CO2 level slowly rose, so too did the temperatures at the surface of land and sea. It is known as the greenhouse effect, with a thick blanket of CO2 above trapping more and more heat to cause warming of the entire planet. The idea of global warming, by the way, was developed by the Irish scientist and Carlow man, John Tyndall (1820-93).

Fast forward to the Paris Agreement and the realisation that we were at crisis point in terms of temperature rise, with land-based glaciers disappearing around the world and the risk of a massive meltdown of the Arctic, Greenland and Antarctica. The world agreed finally to do something substantive about it and since then countries have been speeding up efforts to reduce carbon release.

We are among them but are not exactly a shining example of how best to protect the planet. Aside from Paris, we have been struggling with carbon release limits imposed by the EU over the past decade, and are not achieving them. The Environmental Protection Agency warned last year that we were falling further behind in our commitments and would fail to reach targets. This of course opens us up to big fines imposed by the Commission, so our tardiness to act will come at a price.

Meanwhile, the EU has been working on emission levels up to 2030 and reaching them will be doubly difficult, so expect more “final warning” letters coming to the Department of Finance from Brussels.

So what can Ireland do to reduce CO2 release given that 97 per cent of the energy we use comes from carbon fuels. We have a big coal-burning power plant at Moneypoint and a collection of smaller plants burning gas, peat and low quality oils. We have some renewable sources such as wind and hydro but they have no chance of delivering enough energy to make an entire country go.

One great hope is tidal/wave power. It is an engineering challenge given you have to build a turbine that will turn wave and tidal flow into electricity, but that can also survive being hammered by the Atlantic Ocean. This technology has a way to go, but research continues. Irish marine developers Ocean Energy announced a deal with the US Navy and US company Vigor at the end of last month to deploy a full-scale wave energy generator at the Navy’s test site in Hawaii.

Even clean-burning natural gas is made of molecules including one carbon atom and four hydrogens. What if we could get rid of the carbon, leaving pure hydrogen gas?

The OECD has what it claims is a simple way to reduce fuel demand – tax it into the ground. It released a major report yesterday arguing that taxing energy use was a certain way of lowering demand. Not very popular even if it works.

An equally harsh suggestion came from Solidarity – People Before Profit TD Bríd Smith who introduced a bill that would end the granting of licences for fossil fuel exploration and extraction in Ireland. No more off shore riches, no fracking, no oil industry infrastructure clinging to our climate-changed coastlines. The bill cleared its first stage in the Dáil last week, but it is unlikely the Government would turn its back on the potential windfall of offshore oil.

We might do better rethinking where we get our energy. Even clean-burning natural gas is made of molecules including one carbon atom and four hydrogens. What if we could get rid of the carbon, leaving us with pure hydrogen gas? Hydrogen is as clean as it can get, given if you burn it to release lots of energy. Your only by product is pure drinkable water, and water is also the “fuel” source that is split into hydrogen and oxygen gases using electricity.

Liquefied hydrogen gas would serve as an excellent transport fuel so long as it stays safely in its high pressure bottle. It could also be used to heat homes and offices and if we could make enough of it, hydrogen could be used to generate electricity. Ireland is involved in collaborative research with Northern Ireland and Germany to study the use of hydrogen and how you might split it using renewable sources such as wind and solar panels. If we could make this work, the world would be energy rich given two thirds of our planet is covered by water, and it is carbon free.