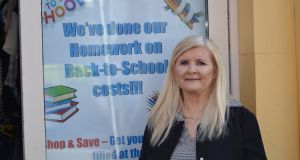 Suzanne Roche, who set up Gateway to Education Limerick: “We help identify why the learner is in difficulty and put programmes in place to help them

Three days a week the Plassey Village Hall in Limerick is home to a study hub for primary and secondary schoolchildren who need a bit of extra help with learning. The initiative is part of Gateway to Education Limerick, a social enterprise set up by Suzanne Roche to provide low-cost educational support for hard pressed families in the area.

The support comes in two forms: one-to-one and small-group tuition at the study hub at a nominal cost and a scheme whereby parents can buy used school books and uniforms at a fraction of the price of new ones from the organisation’s shop in Limerick city.

In 2016 the not-for-profit enterprise helped 1,500 families with low-cost books and school supplies. In 2017 this number rose to 2,500 and the Gateway team have gone as far east as Wexford and southwest as Kerry to collect books for the scheme from more than 30 schools. The enterprise has one paid co-ordinator and four people on the CES scheme but the rest of the 100-strong team are all volunteers, including Roche who manages the overall business.

The study hub is manned by third-level students from the University of Limerick and Mary Immaculate College who volunteer to spend up to 16 hours a month with the children who are aged 6-16. There are 27 children attending the hub from different schools in the area and those at second level are mainly exam year students.

The project is completely self-funded and derives its income from teaching fees – €7 a week for primary school children and €10 a week for secondary students – and book, uniform and sundries sales at its shop. Volunteers also work in the enterprise’s warehouse and office. Books that are not suitable for use in Ireland are sent to schools in Malawi.

As a parent herself Roche says she had found the start of the school year very expensive, especially when it came to buying books for her four children. In 2012 she completed a diploma in social studies and wanted to use her qualification to help her local community. Aware that the cost of books was a pain point for many parents she began looking into what happened to discarded schoolbooks and discovered most were either in the attic or ending up in the bin.

While working on her scheme to get these books back into circulation, Roche met a parent struggling to help their child with homework as the parent could not read or write. This gave Roche the idea for the study hub and ultimately both endeavours were joined together to create the Gateway to Education Limerick.

The enterprise mainly uses Facebook to market its products and services and is also using point-of-sale technology to ensure the shop operates as effectively as possible. “We have invested in a Boxpos system that allows us to gather data around the day-to-day running of the shop,” Roche says. “It also allows us to train people on systems such as card payments for jobs in the retail industry. The system monitors what is sold, how long it’s on the shop floor and it gives us a breakdown of what sells and what does not – including schoolbooks.

“That I’m aware of there is no other social enterprise that works with parents to keep education costs to a minimum and to offer learning and exam support the way we do,” Roche adds. “There are many homework clubs, but they don’t provide one-to-one tuition based on the learner’s assessed needs. We help identify why the learner is in difficulty and put programmes in place to help them. Our ‘customers’ are those in poverty or at risk of poverty, which is 23 per cent of the population, according to latest statistics.”