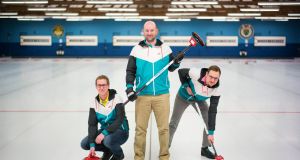 Andrew Flemming and Geoff Fowler tinkered for months in their spare time. They used soldering irons. They printed three-dimensional models in their basements. They brainstormed over beers in Kitchener, Ontario, a small Canadian city about 60 miles west of Toronto, where they kept their project quiet.

“We did a fair bit of work in bars,” Flemming said. Flemming and Fowler, both 29, along with their friend and business partner Will Hamilton (37), were pouring their creative energies into a high-tech training device the likes of which the sporting world had never seen. They were building a better broom. Not just any broom, but one that they thought could be essential to the sport of curling, which relies on the best broom handling out there as teams strategically cajole a polished granite rock across a sheet of ice.

They wound up calling it the SmartBroom, and in a sport that can come across as vaguely primordial, their piece of 21st-century gadgetry could play a role in determining who wins gold at the 2018 Winter Olympics in Pyeongchang, South Korea. Matt Hamilton, a member of the US men’s team, overhauled his sweeping technique after training with a SmartBroom. Curlers from countries as far afield as China, Denmark and Switzerland have leaned on it in their preparation for the Olympics. In all, Will Hamilton, who is not related to Matt Hamilton, said he had sold SmartBrooms to eight of the 13 national curling federations sending teams to Pyeongchang.

“We definitely learned a few tricks,” said Marc Kennedy, a member of the Canadian men’s team.

A quick primer on sweeping: it is important. The science behind it is much more complicated than people think. The simplified version is that sweeping slightly increases the temperature of the ice while creating micro-scratches on the surface. The result is that players are better able to control for distance and trajectory as the rock travels down the sheet. The sport hinges on precision, so every brush stroke counts.

Ahead of the Olympics in Pyeongchang, the gospel of the SmartBroom spread across the globe, and many of the teams competing in South Korea this month are acolyte

But for decades there have been competing theories about sweeping. One such debate: is it more important to sweep faster, with a higher stroke rate, or harder, with greater force applied to the ice? And what about body positioning? Do sweepers generate more power by holding the broom upright or at an angle?

These were the types of questions eating at Will Hamilton. Hamilton was coaching a junior women’s team six years ago and wanted to help his sweepers improve their technique. But he knew there was no clear way to assess how well they were actually doing. It was all guesswork. Hamilton dreamed of producing data that could be used to solve some of those age-old curling debates. So he zeroed in on Flemming and Fowler, two friends with engineering degrees. Hamilton knew they liked to build stuff for fun. At the time, they were trying to invent a climate-controlled, water-cooled suit jacket.

When Hamilton met with Flemming over beers one night, he pitched a new project: was there a way to take a pedometer (to measure stroke rate) and a miniature bathroom scale (to measure force) and fuse them to a curling broom? “So Andrew looks at me like I’m an idiot and says: ‘No, you’d use, like, four sensors and an accelerometer,’” Hamilton recalled. “But I could tell that he thought it was interesting.” Flemming and Fowler were coming to realise that their climate-controlled suit jacket was not about to set the world on fire. (Fowler still has a couple of half-finished prototypes in his closet.) Perhaps they would be better served by focusing on the high-tech broom.

“This has been slightly more successful,” Flemming said. On a recent afternoon, Flemming joined Fowler and Hamilton on the curling ice at Westmount golf and country club in Kitchener for a demonstration. They wore matching windbreakers with “SmartBroom: Sweep Better” on the backs. Each SmartBroom has four sensors in the broom head that relay data to a small display unit. Hamilton took one for a spin down the ice, and the data was instantaneous – line graphs along with a slew of numbers that showed his force in pounds and his stroke rate in hertz. Hamilton also pointed to a figure that he described as his “sweeping performance index,” or SPI, a metric that combines power and speed in one easy-to-digest figure.

Patrick Janssen, a world-class curler from Canada, has consistently registered an SPI in the 2,800 range. Fowler provided context. “As a Thursday night club curler, I’d be happy to get 2,000,” he said. The numbers by themselves might not mean much, Flemming said, but subtle changes in technique can lead to big differences in the quality of each stroke. And now curlers have that information at their disposal. They can experiment to see which stroke works best for them.

The first SmartBroom was used by Canada before the 2014 Winter Olympics in Sochi, Russia. But at the request of Curling Canada, the country’s national curling federation, Hamilton and his partners agreed not to sell SmartBrooms to other consumers until after the Olympics. Fowler called it a “polite agreement” rooted in relationships with Curling Canada officials.

In Sochi, the Canadian men and women swept gold. Ahead of the Olympics in Pyeongchang, the gospel of the SmartBroom spread across the globe, and many of the teams competing in South Korea this month are acolytes.

Will Hamilton declined to say how many SmartBrooms he and his partners have sold, but they are not retiring anytime soon – or even quitting their day jobs. Flemming and Fowler are engineers, and Hamilton works in information technology for a hardware company. The SmartBroom, Hamilton said, is a “side hustle,” albeit a useful one. The broom retails for $3,000. (Canadians get a discount.)

They all hope that more innovations are forthcoming. For example: hardware light enough to embed in brooms used in competition so that real-time statistics can be broadcast on television. “This,” Flemming said, “is not the end of what we plan to do.” – The New York Times News Service