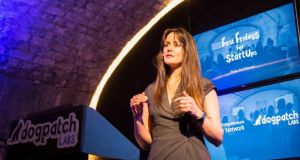 Nuritas founder Nora Khaldi at First Friday for Start-ups: “The life-sciences industry is based on evidence and yet very little evidence is used – it is a big paradox.”

The race is on to be the first company to market with a drug developed by artificial intelligence (AI), with Irish start-up Nuritas among those leading the charge.

Addressing attendees at an event at Dogpatch Labs in Dublin’s docklands recently, Nuritas founder and chief scientific officer Nora Khaldi outlined the impact AI will have on life sciences and how her company is helping to lead a revolution in health.

“AI has achieved a lot in many areas but very little so far in life sciences and true biology. I believe, though, that biology is the area where AI will have the largest impact over the next few years,” she said.

“I think it would be great for everyone who works in AI or computer science to focus on this area because it will be the most impactful for humankind,” Ms Khaldi added.

Nuritas uses data mining of molecules in food and food byproducts to identify supplements and new drugs. The company was founded by Ms Khaldi, a TCD-trained mathematician and bioinformatics specialist, in 2014 and was subsequently spun out of NovaUCD’s VentureLaunch accelerator programme.

It recently announced $20 million in series A funding in a round led by Chicago-based Cultivian Sandbox Ventures. It has raised about $30 million in total , which includes early funding from Salesforce chief executive Marc Benioff and U2’s Bono and Edge.

Appearing at “First Fridays for Start-ups”, Ms Khaldi said the traditional method for discovering drugs was broken, noting that it still takes as long and costs as much to develop a new drug as it did 20 years ago.

“It used to take about 15 years and and cost $2.5 billion to create a single drug. If you look at the figures today it still takes the same amount of time,” she said.

Ms Khaldi said there were a number of reasons why the traditional system for discovering drugs does not work, including the fact that the life sciences sector is very specialised, meaning that most researchers in the space do not talk to each other. In addition, there is bias on the part of scientists and, perhaps more worryingly, a huge amount of data that is largely unprocessed and unstructured.

“Every 30 seconds a life sciences paper is published, equivalent to about 3,000 papers a day. It would take a scientist 10 years to read that many papers,” said Ms Khaldi.

“All that data that has been collated has been of no use because if we knew how to use it properly it should not take so long to discover drugs and get them to market,” she added.

The result is that when it comes to uncovering new drugs it’s a case of looking for a needle in a haystack.

“The problem is that most research is random. You’re literally just hitting cells and trying to find things that work. The life-sciences industry is based on evidence and yet very little evidence is used – it is a big paradox,” said Ms Khaldi.

Instead of randomly trying to find a needle , Nuritas uses big-data techniques to discover peptides – molecules in food and food byproducts – that can be used by the life sciences sector in supplements and new drugs. The company says it can find these peptides 10 times faster and 500 times more accurately while significantly reducing costs.

“If you ask a colleague ‘Could you find me a treasure chest in the ocean?’, they might say yes but it could take them a lifetime looking for it. We know there are treasure chests in the ocean for sure but how can we find them without a map. What Nuritas is doing through AI though is pinpointing the location and tell you there’s an 80 per cent chance of you finding the treasure chest here. We are providing a map through those trillions and trillions of molecules,” said Ms Khaldi.

So successful is the company’s method that it takes Nuritas about a year to go from computer prediction to clinical trial, something largely unheard of in the space.

Nuritas has already developed and patented health-improving ingredients that can address global challenges as broad as inflammation, diabetes, ageing and MRSA, among others.

“Information lies at the core of everything we do. For example, we set out to find an anti-inflammatory by starting off with billions of peptides in different plants and narrowing that down to about 100 that we thought were good. We pushed forward and found two networks that could be scaled and where we could successfully show that a peptide which was found and designed on a computer could work in a clinical setting,” said Khaldi.

It has now been licensed out and will hit the market later this year, initially in US.

“There is a race on as to who will get the first drug to market with a big success rate that has come from an artificial brain and we want to win it,” she said.

Ms Khaldi said one of the great things about working on peptides is that it means Nuritas is not constrained to one or two diseases.

At the start, the company’s business model was primarily to discover peptides and take them to a certain level before licensing them out, while retaining the patents. That model is changing, however, as the real driver is now companies, including the likes of Nestlé, coming to Nuritas with specific needs in the market that are commercially viable and asking it to find something on their behalf.

Ms Khaldi said ethical decisions sway what projects Nuritas work on and that it hopes at some point to go beyond commercial work and focus partly on finding cure for rare diseases so that it can give away the results.

“Our goal is global and it to improve the lives of billions of people,” she said.