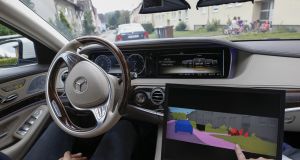 Children and parked cars are colour-coded on a monitor inside a Mercedes S-Class car. Photograph: Michaela Handrek-Rehle/Bloomberg

It’s no wonder that every tech firm and carmaker with a research-and-development budget to spare is getting on the autonomous, self-driving car bandwagon. You can quibble all you like with the timeline of how far away fully robotic cars actually are, but the numbers stack up regardless. The German federal ministry of economics, for example, has conducted research that shows that by 2025 the autonomous vehicle market in Germany alone could be worth €8.8 billion and employ as many as 130,000 people.

So, rich rewards are there for those who create and market the technologies needed for autonomous cars, but there are massive hurdles standing in the way. Government regulation is one thing (less so as more and more governments begin tweaking road traffic legislation to allow companies to take advantage of the supposed autonomous boom) but there are bigger worries than that.

For small companies, working on the pure technology and software involved, the biggest challenge is building a car. Even gigantic Apple appeared to baulk at the up-front investment in that. For existing carmakers, it’s barely any easier, as funds needed for conventional vehicle development must be funnelled into research on blue-sky tech that may take decades to turn a profit.

The solution? Collaboration, certainly here in Europe where the funding landscape is rather different to that found in the United States and Asia. Here, it seems, it’s better to let smaller start-ups, comfortable with their low overheads, to do the donkey work on the emergent technology, while the bigger, extant companies can then swoop in and snap up the benefits. The purchase of Israeli sensor company MobileEye by Intel is one such example.

There’s an example closer to home than that – Movidius. A camera sensor and “deep learning” specialist firm, Movidius was originally established in Dublin by Seán Mitchell and Dr David Moloney, with a design centre in Romania. Its Myriad sensors proved so good that the company was also swallowed up by Intel, and its devices are now being used for, among other things, self-flying camera drones.

It’s this kind of collaboration that makes breakthroughs more likely, and more financially stable. “What makes autonomous vehicle research exciting is building a deeper interaction between AI and people while strengthening security. Our researchers at IBM in Ireland are working with automakers, universities and start-ups, to help rethink vehicle design for the next 30 years,” IBM Research Ireland director Dr Wendy Belluomini told The Irish Times.

IBM has been working with a team at University College Dublin to develop a new in-car AI assistant that could help to cut journey times, and which makes on-the-fly navigation much easier. There are other potential uses of the system than in cars, though. IBM and UCD have also developed special sensors and software for electrically-assisted bicycles which can detect when they’re passing through a zone of high pollution, which causes the bike’s electric motor to work harder, reducing the aerobic load on the person riding the bike, which means they breathe in less dirty air.

IBM reckons that this sort of little and large collaboration is the best way forward in a European context. “The traditional boundaries of an industry like automotive are disappearing. In fact, from the IBM Automotive 2025 study that we published recently, 73 per cent of automotive executives we interviewed said that collaboration with other industries will become the centrepiece to their growth strategy” a spokeswoman told The Irish Times.

There are, of course, other innovations beyond the purely technical that will help to usher in the future of autonomous motoring. One such home-grown idea is Fleet, an Irish start-up hoping to be the “AirBnB of cars”.

Devised by Irish businessman Maurice Sheehy, the idea is to allow other people to use your car when you don’t need it – such as when it’s parked up for the day while you’re at work. Backed by Axa insurance, the Fleet app allows others to take up the slack ‘downtime’ of almost every privately-owned car. It’s a small step, but one that at least introduces people to the idea of the shared motoring economy, as well as (potentially) allowing them to earn a little extra vehicular rental income on the side.

There are big collaborations afoot at the European level too. German-based blockchain expert BigChain DB has recently announced a tie-up with Toyota to develop systems that will allow autonomous cars to share information with one another, keeping each other aware of traffic hold-ups or accidents. Meanwhile, French-based autonomous taxi maker Navaya, which raised some €30 million in capital two years ago, has decided that the right collaboration is with governments and NGOs, tying up with the likes of the Hong Kong authorities and the Royal Automobile Clubs of Australia and New Zealand to put self-driving pods in the places that need them most.

There are more traditional companies involved in the autonomous collaboration game, too. German components manufacturer ZF, famed for its gearboxes, has hooked up with microchip and sensor expert Nvidia to work on autonomous tech, and has been rated as 65 per cent most likely to be the first to put a full-autonomous car on sale by Navigant Research, ahead of such giants as Honda and Uber.

While much of the work of the autonomous vehicle revolution, thus far, has been focused in North America, specifically in California’s Silicon Valley, and in the dry and wide-open environment of Nevada, it’s in Europe that (along with Japan) the customers most likely to be enthusiastic about self-driving cars are to be found. It’s why Carlos Moedas, the EU’s commissioner for research, science and innovation, said: “Automated road transport is such a fast-moving and important area that it requires a co-ordinated and a collaborative approach within and between the public and the private spheres. A vast range of sectors, from the automotive industry and road infrastructure to IT and telecoms, have a role to play in exploring this new frontier.”

But it’s not just a question of creating new technology, stuffing it into a rolling chassis, and sitting back and letting the money roll in. Autonomous car technology has the potential to dramatically alter not just the world of motoring, but society itself.

Atsushi Okawa, chief operating officer of Clarion Europe, told The Irish Times that caution is needed along with research. “Creating innovations in the automotive sector is good, but getting them adopted is better. Opinions are currently divided on the question of whether or not users are ready to adopt autonomous cars,” he said. “In France, however, despite advanced R&D in the automotive sector and very strong skills in engineering and industry, users seem to be more conservative than in, for example, Japan. Over the next few years, the big challenge will therefore be to gain their trust in these new ways of getting around.”

Clearly, we’re still further away than many people think from an all-autonomous future. The technology is still in its infancy, in spite of the blazing publicity surrounding it. The distance between us and a road full of autonomous cars is long and studded with obstacles, and it is only by collaboration and co-operation that those obstacles can be swerved around.