Co-housing, 3D printing and algae: How will we live in the future? 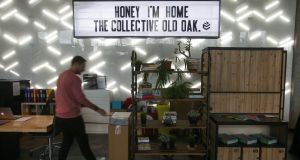 Nestled among the hipster hangouts of Copenhagen’s Meatpacking District, a team of 20- and 30-something design entrepreneurs are reimagining the future of how we live.

In a renovated former fishery building, Space10 is furniture giant Ikea’s lab for testing prototypes and ideas for better and more sustainable ways of existing: from insects and algae replacing meat in our diets, to indoor gardens for city dwellers.

The lab’s underground workshop is filled with iMacs and digital manufacturing tools, as Space10 is also exploring “open-fabrication” – where designs are shared online and goods are made or printed locally using machines that follow digital patterns.

The lab’s mission is to ensure that Ikea will still have a successful business as widespread use of technology, population growth and urbanisation create ever-more-rapid change. “How can we design new concepts and solutions that are futureproof?” said Kaave Pour, Space10’s 28-year-old bespectacled creative director, over the whirring of a 3D printer.

Among the new frontiers for Space10 is “co-living”. An umbrella term for housing shared by two or more people who are not related, the idea is seeing a revamp – driven by young professionals in cities, people who may be more digitally connected but feel lonelier than ever.

From New York and London to New Delhi and Shanghai, millennials are increasingly blurring the lines between home, work and play – sharing spaces to save money and time as well as make new friends.

Space10 – an external think tank working solely for Ikea – believes shared housing has the potential not just to overhaul the real estate world but also consumer patterns which have been in place for decades. The lab sees itself as an agitator, forcing a rethink in ways of living. “We want to move quickly and radically improve the idea of what is a better life,” said Mr Pour.

Other entrepreneurs and their financial backers are also staking their claim on an industry that sees space as a service – and one with a potential future value of tens of billions of euro. The Collective, Common, and WeLive in the UK and US are among the most well-known co-living companies, placing a premium on convenience and community, and aiming to take the notion of shared housing beyond the realm of hippies, students and the elderly.

They are not cheap. It will cost you about £1,000 (€1,120) a month for a spot in The Collective’s 550-bed tower in Old Oak on the outskirts of London and more than $3,000 (about €2,600) for a private studio in WeLive’s property in lower Manhattan. For this you can get shorter, flexible leases and the flat monthly fee includes rent, utility bills, cleaning and laundry. You also have access to fully-furnished private bedrooms and shared kitchens, office and recreational spaces – from bars and movie rooms to gyms and hot tubs. They even organise activities. The aim is to minimise the friction that often makes flat-sharing and city-living a misery.

These companies proliferated in the aftermath of the global financial crisis, coinciding with a rise in one-person households. To understand if this is what people want from co-living, Space10 last year joined New York-based designers Anton Repponen and Irene Pereyra to launch a survey. While not authoritative, it shed light on what younger people think.

About 85 per cent of the 7,000 respondents were 18- to 39-year-olds living in northern Europe, North America and Asia. Among the main findings published in November were that respondents wanted smaller shared houses (of up to 10 people of different ages); a way to decide what their home looks like and a means to choose their housemates. They also wanted to own, not rent, their home. The results suggested that existing co-living companies that control so much are struggling to get the balance right – between convenience and flexibility and the stability that encourages longer-term commitment.

Grasping these issues is vital, not only as millennials dictate current and future consumer trends, but as the world adds another 1.2 billion people over the next 12 years – with most expected to live in fast-growing cities in India and China.

House prices are rising in almost every major city, according to UBS research. Meanwhile, the IMF says incomes have failed to keep up. When anxieties about job security and costly university degrees are added to the mix, it often means young people are enduring greater uncertainty and are putting off traditional milestones such as marriage and having children.

Space10 believes that as younger people feel the pinch more than their parents did, they will lead the charge in sharing resources in the broadest sense. The so-called “sharing economy” – which brought the world Airbnb, Uber and Spotify – is now fully entering the home.

This is also partly because even as millennials’ digital connections grow, they increasingly crave human interaction. The UK’s Office for National Statistics found that people aged 16 to 44, renters and those less strongly attached to their neighbourhood, were more susceptible to feeling lonely. Urban millennials often fall into all of these categories.

“Co-living is a potential answer for a lot of people who are seeking community,” said Mr Pour. This type of housing could also appeal beyond the urban and unattached, to people throughout their life. “Younger generations are not just thinking about how it would be great to live today,” he added, “but also when they’re old.”

Collective living has been practised across different cultures throughout history, but the modern concept of co-living was pioneered in Denmark in the 1960s. Writer Bodil Graae’s 1967 newspaper article “Every child should have 100 parents” popularised a movement that lead 50 families to develop a co-housing project to ensure life-long care and community.

Compared with those older communes, newer co-living projects and San Francisco’s bunk-bed filled “hacker houses”, Denmark has since become home to more realistic models of shared living. Experts in the country have by now spent decades testing the limits of bringing lots of families under one roof.

The Lange Eng co-housing project outside Copenhagen opened more than a decade ago, and is the biggest of its kind. Kasper Pilemand is the architect at design firm Dorte Mandrup, which created Lange Eng. Community can be good, he says, but too many people or too few can isolate. Too many rules or too few can also alienate.

Individuals have to make a conscious effort to be part of a community – it cannot be fostered by a third-party. Owning a part of it also helps. “Co-living can only exist if it’s a choice every single time,” says Mr Pilemand. Copyright The Financial Times Limited 2018