So mad about tech, China even loves its robot waiters that can’t serve

China surges ahead in AI and robotic investment but is much of it tech for tech sake? 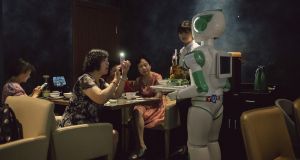 The mind-reading headsets won’t read minds. The fire-detecting machine has been declared a safety hazard. The robot waiter can’t be trusted with the soup.

China is ready for the future, even if the future hasn’t quite arrived.

China has become a global technological force in just a few short years. It is shaping the future of the internet. Its technology ambitions helped prompt the Trump administration to start a trade war. Hundreds of millions of people in China now use smartphones to shop online, pay their bills and invest their money, sometimes in ways more advanced than in the United States.

That has led many people in China to embrace technology full tilt, no matter how questionable. Robots wait on restaurant diners. Artificial intelligence marks up schoolwork. Facial recognition technology helps dole out everything from Kentucky Fried Chicken orders to toilet paper. China is in a competition with itself for the world record for dancing robots.

That embrace of tech for tech’s sake – and the sometimes dubious results it leads to – were on display at the Global Intelligence and World Business Summit, held last month in Shanghai, which several luminaries in Chinese tech and academia were supposed to kick off with their minds.

Donning black headbands that looked like implements of electroshock therapy, the seven men and two women onstage were told to envision themselves pressing a button. The headbands would transmit their brain activity to the robotic hand sharing the stage, which would then push a button to officially start the conference.

A countdown began. A camera put the robotic hand on to a huge screen above the stage. The people onstage seemed to concentrate. And then, nothing happened. The hand remained motionless. The camera panned away.

A spokesman for Yiou, the tech consultancy that hosted the event, declined to comment except for: two emojis showing tears of joy.

All of this embarrasses some people in the Chinese tech scene. They warn that the excess exuberance is one sign of a venture capital bubble, which may be about to burst. Rather than show China’s newfound tech might, they argue, spectacles such as dancing robots and ineffective mind readers cover up the country’s lack of progress in other areas.

Those deficiencies were made clear in April when the United States forbade US companies to sell chips, software and other technology to ZTE, a Chinese telecom company. ZTE was found to have violated US sanctions by selling products to Iran and North Korea. The ban brought the company to a virtual standstill.

Chinese people shouldn’t lose touch with reality, warned Liu Yadong, chief editor of the state-run Science and Technology Daily. In a recent speech, he said China still lagged the US in tech, and that those who argued otherwise ran the risk of “tricking leaders, fooling the public and even fooling themselves”.

Now it’s pushing ahead into emerging tech. In 2017, Chinese startups took up nearly half the dollars raised globally for artificial intelligence, according to CB Insights, a research firm that follows venture capital. By 2020, China is expected to account for more than 30 per cent of worldwide spending on robotics, according to technology research firm IDC.

Many in China see the country’s supremacy over the US in tech as inevitable, and they are eager to get to that day.

“Chinese are much more willing to try something new just because it looks cool,” said Andy Tian, chief executive of Beijing-based Asia Innovations Group, which runs mobile apps. “It sounds superficial. It is superficial. But that’s the driver of progress in a lot of cases.”

The E-Patrol Robotic Sheriff could fill that bill. It is among several security robots that have shown up at train stations and airports around China in recent months. The E-Patrol Robotic Sheriff – which looks like the camera lens from the HAL 9000 computer in 2001: A Space Odyssey mounted on a white rubbish bin – patrols the high-speed rail station in the city of Zhengzhou, tasked with using facial recognition to find and follow suspicious characters, as well as to measure air quality and detect fires.

During a winter visit to the station, the robot was nowhere to be found. First, it had missed a fire, officials said. It also had a tendency to collect so many selfie-seeking fans that it became a safety hazard. A spokesman for the train station said it was getting an upgrade and would eventually return.

Robots in particular have captured the Chinese imagination. A Beijing television station this year made a robot-dominated version of the country’s annual New Year television special. Robots and humans performed t’ai chi and comedy routines, and sang and danced.

Companies and local officials often have good reason to show off their splashiest and silliest wares. China frequently takes a top-down approach to technology, with local governments rushing to follow plans that come down from on high. Gizmos with a bit of futuristic verve are often the best symbols of progress.

Dancing robots, for example, became something of a fixture of company and government presentations last year. “They were everywhere,” said David Li, a co-founder of Shenzhen Open Innovation Lab, a government-supported platform that supports small hardware startups in Shenzhen. He estimated that he had seen 10 dancing robot shows in a single week.

Robot restaurants have been popping up across China. One in Shanghai’s Xujiahui district, Robot Magic Restaurant, cultivates a space-age, mini-golf ambience. Diners enter through a door on which animated fairies flap their wings. Inside, a robot with hearts for eyes charged its batteries in an ersatz cave rimmed by silver stalagmites tipped with glowing white lights. On the ceiling, fake stars twinkled.

Waiters said their automated counterparts caused more work than they saved. The robots take trays of food out to customers, but are unable to lower them to the table. Real waiters stand back so photos and videos can be taken before shuffling in and serving food the old-fashioned way.

The robots also break down. Three times during an hour lunch, a waiter had to lean a robot on its side and take a blowtorch to the undercarriage to burn out food and trash caught in its axles. When asked whether he was worried that the robots would take his job, the waiter laughed.

“I’ve just been to America, and I didn’t see many new things at all,” said Xie Aijuan, a retiree in her 50s. “I don’t think they have anything like robotic restaurants there.”