Why are high-flyers prone to plumbing depths? 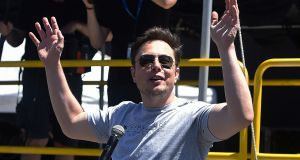 Tesla founder Elon Musk caused an international news sensation when he made vile allegations without any foundation against one of the divers involved in the Thai cave rescue. Photograph: Robyn Beck/AFP/Getty

Why is it that some people who become famous for their ability to innovate and invent can also sometimes become famous for other less savoury reasons? The question is prompted by the outburst last month of tech hero and mega innovator Elon Musk when he intervened during the flooded cave rescue in Thailand. He caused an international news sensation when he made vile allegations over Twitter without any foundation against one of the key rescue divers, Vernon Unsworth. Musk later deleted the offending tweets.

Why did Musk feel he had the right to do such a thing? Was it his reputation as an innovator at an international level? Did this mean his views carried more weight than those held by the rest of us? Was it because he is worth €20 billion and can say what he likes as a result? Or was it his celebrity status as a tech guru, allowing his ideas to take precedence over others?

One would probably have to assume there is a degree of ego at work here too given Musk’s undoubted success as a pioneer and businessman, with people writing down his every utterance on issues of all sorts. And very bright people also tend to be highly motivated and driven and cannot understand why those around them do not exhibit a similar level of commitment.

Musk is not the only example of a person with a great mind who blew off social convention in exchanges with people while remaining an icon. Steve Jobs of Apple remains an icon for the information technology industry and is held up as an ultimate innovator, but those around him paid the price for being too close to genius. For years he was one of the lowest paid chief executives in the world, drawing down an annual salary of just $1, living instead off the dividends coming from his major shareholding in Apple. Those who worked with him described his dark side, hectoring his staff and sometimes humiliating them, but all the while remaining an inspiration.

Perhaps it is the inspirational aspect of overachievers in technology and science or the creativity they exhibit in taking us where “no man has gone before” to steal a line from Star Trek. The world’s most famous physicist, Albert Einstein, must have exuded some of this catnip that allowed him to attract two wives and run through a string of mistresses during his career in Europe and later the United States. This started reportedly with one of his earliest tutors, Marie Winteler, when Einstein was a teenager.

Much closer to home another famous physicist raised eyebrows after being invited to move to Dublin by no other than Eamon de Valera. Erwin Schrödinger arrived here in 1940 to set up the Dublin Institute for Advanced Studies. The Austrian scientist had a share of a Nobel prize and had made spectacular advances in the emerging science of quantum theory.

His entourage included his wife of 20 years, Annemarie Bertel and also Mrs Hilde March and her daughter Ruth whose father was Schrödinger, and they settled down in Clontarf. Their unorthodox living arrangements were widely known at the time but were tolerated given the scientist’s international importance and prominence, and he remained for the following 14 years. He also managed to father two more daughters with two other women during his time here so he was a busy man between the institute, continuing research in quantum mechanics and his personal life.

Clearly the overachievers mentioned here follow a path less travelled. But taking this approach carries with it consequences that can produce collateral damage. Maybe the icon or the guru are not the people we need to comment on issues outside of their respective skill sets? Or do we need to tolerate when an innovator goes off grid given the advances that might emerge as a result?