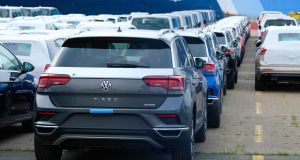 The best-selling brand for new cars remains Volkswagen with 12,335 registrations for the year to date, giving them a market share of 10.8 per cent

Some 26,944 new cars were sold in the Republic last month, down 2.75 per cent on the same month of 2017. The first month of the 182 plates saw the total number of new registrations since January total 114,059, a drop of 4 per cent on the same seven-month period last year, according to figures from the Society of the Irish Motor Industry (Simi).

In contrast, the number of used imports continues to rise, with 8,096 arriving in the Republic last month, bringing the total so far this year to 59,973, up 11.7 per cent on the same period last year.

At the premium end of the market Audi tops the list with 4,407 registrations, ahead of Mercedes-Benz with 3,807 and BMW with 3,672. All three premium brands have recorded drops in sales of between 9 and13 per cent so far this year.

The best-selling model remains the Hyundai Tucson with 3,801 registrations, ahead of the Nissan Qashqai with 3,775 and the VW Golf with 3,413. SUVs and so-called crossover vehicles now dominate the new car market, accounting for two out of every five new cars sold in 2018.

Despite the ongoing political backlash against diesel – and talk of a rise in excise taxes on diesel fuel to bring them closer to those on petrol – it remains the favoured fuel choice of buyers, representing 54.4 per cent of new cars. However, that is down from 65 per cent of the market last year. Hybrids continue to perform strongly, now accounting for nearly 6 per cent of the market, while electric car sales have started to rise, hitting 915 registrations to the end of July compared to 485 this time last year. However, that still equates to just 0.8 per cent of the total new car market.

Among the 59,973 used cars imported, the majority are aged between three and five years-old by the time they arrive on the Republic’s roads.

Volkswagen was the most popular marque, with 7,434 cars, ahead of Ford with 6,947, Audi with 5,243 and BMW with 4,648. Electric cars are also proving popular among importers, accounting for 383 registrations.

Alan Nolan, director general of Simi said: “The 182 sales period has been a good month with new car registrations only slightly down on the same period last year, while registrations in the commercial sector in particular are showing positive signs of growth, with businesses investing in the renewal of their fleets. Electric vehicle registrations have seen a marked increase despite currently only holding a small percentage of the marketplace and will continue to grow over the coming years.”