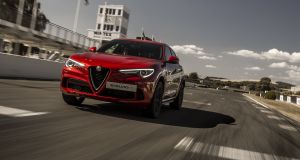 The Alfa Romeo Stelvio Quadrifoglio is, for now, the world’s fastest SUV, or at least the one which has posted the fastest lap of the famed Nurburgring race track

If ever there were two vehicles which showed just what a broad and inaccurate phrase ‘SUV’ is, it’s the Jeep Wrangler and the Alfa Romeo Stelvio Quadrifoglio. Both are, incontrovertibly, SUVs, or 4x4s if you prefer. Both are made by the same company, in the sense that both brands are owned by Fiat-Chrysler Automobiles (FCA).

The two could hardly be more different, though…

The Alfa Romeo Stelvio Quadrifoglio is, for now, the world’s fastest SUV, or at least the one which has posted the fastest lap of the famed Nurburgring race track. A pointless endeavour? Doubtless, so, but its 7 min 51.7 sec laptime brings it unquestioned bragging rights.

To get a two-tonne SUV around the ‘Ring that quick, Alfa has fitted the Stelvio with the same 510hp twin-turbo V6 engine as found in the Giulia Quadrifoglio saloon. Designed and built on Alfa’s behalf by Ferrari, this bellowing, snorting engine drives all four wheels through an eight-speed automatic gearbox (which can whip through changes in 150-milliseconds) and a rear differential which uses two clutches to be able to apportion power to the rear wheel that needs it most. Power, under normal circumstances, goes entirely to those back wheels, but the Stelvio can shunt as much as 50 per cent up to the front wheels as and when it’s needed.

Aiding and abetting all of that is suspension with adaptive dampers, and the DNA Pro selector, which allows the driver to choose between Dynamic, Natural, and ‘Adaptive Economy’ modes, as well as a Race mode that’s specific to Quadrifoglio models. There’s an additional Chassis Domain Control unit, a ‘brain’ that monitors all of these systems, and the stability control, and decides how best to deploy the car’s power.

How much? €118,795 which is a heck of a lot, not least for a brand that has managed to shift a mere 11 Stelvios so far this year. It is, in some senses, a bargain though. Porsche, after all, asks more for the Macan Turbo S Performance model, which has some 70hp less power.

The Wrangler is hardly recognisable as being from the same species as the Stelvio, let alone the same company. Still showing, proudly, the lineage that stretches all the way back to the original 1941 Willys General Purpose 1/4-Ton Truck, which became the first Jeep, all but the most eagle-eyed Jeep acolytes will probably fail to spot that this actually is the new model (the giveaway is the kink in the slope of the radiator grille, which used to be flat).

New it is, though, although it keeps the two-or-four door layout, and once again you can have it with a hard-top roof, a soft-top, a hard-top with removable panels, or from next year an electrically powered soft-top.

It’s not only four-wheel drive, it actually gets the choice of two distinct four-wheel drive systems; ‘Command-Trac’ for Sport and Sahara models, and a more serious off-roading ‘Rock-Trac’ for Rubicon models, which really are designed to live in the woods, rather than on the road. You can switch both systems between rear-wheel and four-wheel drive, and the Wrangler has more than 250mm of ground clearance, and is able to wade standing water of up to 760mm deep. On Rubicon models, you can even decouple the front anti-roll bar for maximum wheel travel when off-roading.

The Wrangler gets new engines this time around, using the same 2.2-litre diesel as the Cherokee (and indeed the Alfa Romeo Stelvio) with 200hp and 450Nm of torque. There’s also the option of a 272hp 2.0-litre turbo four-cylinder petrol engine, and next year that will be joined by a hybrid version. Ireland won’t get the 3.7-litre V6 petrol model that will be on sale in the rest of the world. An eight-speed automatic transmission will be available as an option.

Inside, the Wrangler may still looks basic, but it’s also a lot more sophisticated than it used to be. Basic models get a seven-inch touchscreen, and there’s a bigger 8.4-inch unit for more expensive models. High tech safety gear includes blind spot monitoring, a reversing camera, and ‘Electronic Roll Mitigation.’ You can even have heated seats and steering wheel, but Jeep is emphasising that the Wrangler remains the most rugged SUV you can buy - the windscreen still folds flat, the doors can be removed entirely, and there are even instructions for how to do so and the tools you’ll need in the central armrest.

Wrangler prices currently start at €53,250, but this model is likely to be a bit more expensive when it arrived in the autumn.