Process management and automation tool is brainchild of Dublin-based couple 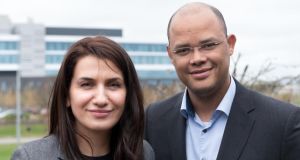 There is some debate as to whether Albert Einstein actually defined insanity as doing the same thing over and over and expecting a different result, but the sentiment certainly struck a chord with tech entrepreneur and software developer Osvaldo Sousa, who spent 17 years pounding the same ground building similar automated process solutions for different companies.

In July 2016 Sousa and his wife, Derya, (an IT consultant), decided to pool their skills and develop a solution that consigned this constant reinvention to history. They set up business process management and automation company Kianda, and have spent the last two years developing a cloud-based platform that enables users to easily build forms and workflows to streamline complex business operations.

This automation of repetitive administrative tasks is not new in itself. There are already systems on the market that can do that. But the Sousas have moved the game on significantly in two key ways: their system does away with the need for companies to buy expensive customised solutions and the user interface is sufficiently simple and intuitive that it can be used by non-technical staff with no coding experience.

Derya Sousa says the growth opportunities for Kianda’s technology worldwide are significant. “The global business process management market is expected to go from $6.96 billion in 2016 to over $23 billion by 2024,” she says. “We have existing competition in our space but we already have live enterprise customers who have switched from competing products because they preferred our platform’s better/higher performance, its speed, its flexibility and the fact that it can be controlled in-house.”

Kianda’s system is aimed at companies with more than 100 employees and is suitable for organisations with thousands. Typical applications include security incident management, quality assurance, expenses reports, proposal and contract generation and employee induction. The product has been trialled with five test companies with staff numbers ranging from 500 to 3,000 and it had its official launch four months ago. The company now has six paying customers in Ireland, Angola, Portugal and Denmark. The revenue model is software as a service (SaaS) and companies will pay an initial implementation charge and an annual licence fee based on the number of users.

“Having worked in many different organisations as a hands-on developer, Osvaldo could see a real need for change and also the potential for a next-generation automation platform to eliminate cost and give time back to people to do more valuable work,” Sousa says. “We have a single goal: to bring digital business process automation and collaboration to the next level.

“Our solution comprises one single platform for workflow, analytics, dashboards and data connectors and is aimed at a wide variety of industries/sectors including human resources, customer service, IT, administration, sales, marketing and finance,” she adds.

“It can handle everything from basic business functions to company-wide processes with a few clicks. With its connection to multiple back-end systems, it’s a single-point access to a company’s core systems that can transform slow, error-prone manual operations into automated digital workflows and improve the way people work in companies of all sizes.”

Sousa says existing workflow automation products are expensive to implement and rely heavily on dedicated developers to maintain them. Most are also dependent on other legacy technologies and can be slow to innovate to meet companies’ changing needs. “Kianda is designed with the newest technologies to provide high performance and the ability to adapt to the specific business needs of each client. Solutions can be built by non-tech staff and the system is easy to onboard, is platform-agnostic and connects to company’s existing systems seamlessly,” she says.

Osvaldo and Derya Sousa met while studying in Portugal. They are from Angola and Turkey respectively and have lived in Ireland for the last 10 years. “I have worked in several industries as an IT consultant helping companies build web solutions for more than 12 years, while Osvaldo is an expert in collaboration technologies and helps enterprises to streamline and remake their business processes,” Sousa says.

“We currently employ four people and are hiring two more. Our vision is to become the market-leading platform for process automation globally. We want to put people in the driving seat of automation, let them see it and AI as an opportunity to upskill and reduce costs and free them up to use their business acumen to be more productive and ultimately to use their time better in other areas.”

The Sousas are the parents of two young children and one of the hardest parts of setting up their business was quitting their full-time jobs to focus completely on developing Kianda. The company is based at the LINC innovation hub at Blanchardstown IT and Sousa was a recent participant in the Enterprise Ireland-backed New Frontiers programme run at the centre.

“We got very good support and advice on the programme and were assigned excellent mentors who were very experienced in helping a startup,” Sousa says. “The biggest challenges so far have been finding the right networks and contacts to develop our business, scaling up the team – it hasn’t been easy to find people – and getting the work-life balance right as when you’re both working in the business the temptation is to talk constantly about it.”

Kianda is facing some strong competition from much bigger overseas companies in its space but Sousa is sanguine about the prospect of a David-versus-Goliath showdown. “What really stands to us is our expertise and indeed our smaller size, because we can react very quickly,” she says. “We are aware that customer service in the sector is not as good as it should be and that support is not as forthcoming as it needs to be. We are nimble and able to be highly reactive and to move a lot faster to respond to customers’ needs than some of the companies out there.”

Sousa estimates that between time and money (self-funded) it has cost about €300,000 to bring the product to its launch point. For now, she says, the focus is on growing the company’s customer base, with Europe as its initial target market. All going to plan, the company will launch a funding round in first quarter of 2019.