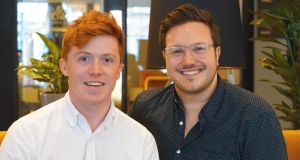 David Gogan, a former vice-president at record label EMI Ireland and son of the legendary DJ Larry Gogan, believes the traditional era of A&R is over and artificial intelligence (AI) is best placed to find “the next U2 or Picture This”.

Gogan, who ran marketing at EMI Ireland for six years until its closure in 2013, has teamed up with Zach Miller-Frankel and Neil Dunne – the founders of Andrson, a startup which uses analytics and “audio AI” to connect unsigned artists directly with industry executives.

Gogan, who was brought on board for his industry nous and to open some doors, said the reaction so far had been “very positive” for an app that is still at the prototype stage.

“The music industry was one of the first to be disturbed – people forget one of the few things you could do on a first-generation smartphone was play music, so it had to adapt, evolve and embrace that change,” he says. “In today’s market it is vital to be data-driven, but it always comes back to the music. Apps like Andrson are a fantastic tool to utilise that new technology to help both the industry discover new talent and artists present themselves on a world stage.”

The genesis for Andrson – set up in June last year – comes from New Yorker Miller-Frankel, who started his own artist management firm in 2013 after working in the industry for a couple of years and helping to manage established indie acts The National and The Antlers.

“I wanted to grow the business and I had been to Ireland on holiday and been completely bewitched by the place,” says Miller-Frankel, who had studied opera and French. “So I expanded from my base in New York and used an MBA at Trinity as the justification to relocate.”

At Trinity, he met engineering graduate Dunne through “the choral-pop a capella group” The Trinitones, who have a huge following on social media. They appeared recently on Ireland’s Got Talent and their latest cover of George Ezra’s track Budapest has gone viral with about four million views on Facebook alone.

“Zach came up to me one day outside the library with a scrap of paper and the original name and idea for the app,” says Dunne. “For the past 18 months, we have been working, developing and refining a prototype with a user base of about 7,000 artists and some really exciting industry clients.”

Miller-Frankel’s rationale is that the discovery of new musical talent has become ineffective due to the millions of bands and artists on the internet fighting for the listener’s attention. If a label is seeking a female musician between the age of 26-35 within 50 miles who sounds like Taylor Swift, he claims that Andrson will do the hard work for them.

“The problem with the digital music industry is that you have these three or four behemoths, Spotify, Apple Music, YouTube and Deezer, dominating the $16 billion industry and they don’t prioritise new musicians or unsigned musicians,” he says.

Miller-Frankel and Dunne initially set up their own talent management agency, Think Tank, and have sourced a small roster of bands and singers through the more traditional talent-scouting methods. In future, they hope to use Andrson to discover new, unsung artists that deserve to be heard.

“Andrson is centralising information about artists and it saves time and money for everyone trawling through YouTube and Spotify – from the person at Whelans who books gigs to the heads of Universal Music who are looking to fill 10 artists on their roster,” says Dunne.

Andrson uses predictive analytics as well as an AI “secret sauce” algorithm, which the team are reluctant to divulge for fear of giving away their edge.

“Neither of us are coders but we designed how the algorithm works and we know the technology that is involved,” says Miller-Frankel. “Other discovery music apps fail because they rely solely on latent discovery or social influence. We do that too but we take it step further by incorporating audio AI.”

Dunne says the app, which is similar to the Shazam music app, will look at age, gender, location and – crucially – “the audio settings” of thousands of artists to determine the right match. Even though the music industry is very superficial, Andrson will not screen artists for their appearance because the team “don’t want to feed into that”, although geo-location settings allow users “to booty-call a gangsta rapper in Meath.”

According to Dunne, the industry has been receptive because the “A&R man holding up the bar in some dive club” just wants his life to be made easier.

“A&R is now basically non-existent in Ireland and that role is performed by the heads of the labels,” he says. “They are also informed a lot about what happens in the UK and are instructed to some extent from the UK.”

The team, who are presenting “as a high-potential start-up” at the Dublin Tech Summit this week, have just come back from meeting record labels in London. Universal Music Ireland have also previously expressed an interest.

They have raised half a seed round worth about €150,000 from an Irish angel investor and from family and friends, and hope to raise another €430,000 by the end of May. Colin Meagle, chief executive of Continuum Media Group, is on the startup’s board and is helping to advise them.

The app’s developers are based in India but Andrson is hiring a chief technical officer and hopes to bring all development in-house if the current funding round goes well.

The company hopes to have a full working demo to showcase at the Collison tech conference in New Orleans in early May and for the app to go live by the end of June. One of its acts, Toucan, is performing at the Tech Summit but nobody on their roster has been sourced yet via Andrson.

“We hope to launch in Ireland first because we love the music scene here and the artists here deserve to be heard and to be given a leg-up,” says Miller-Frankel. “New York and LA are the music capitals of the world and I just wasn’t hearing enough diverse musicians when I was in the States.”

Gogan’s father Larry Gogan, the legendary DJ who has been on Irish airwaves for 50 years, has taken an interest in the app and hopes it will help him and others to find new, undiscovered talent.

“I have always embraced new formats from vinyl to carts, cassettes to CDs and digital downloads, so any new platform like Andrson that helps new Irish artists be discovered I think is fantastic,” says Gogan. “What a great outlet for DJs and other industry professionals anywhere in the world to tap into to find the next U2 or Picture This.”