‘Put simply, I realised people want to live with friends’ 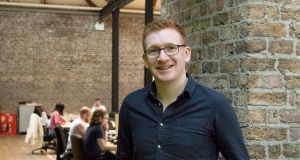 Living in shared accommodation can be harmony or hell, depending on how well the people get on. Up to now choosing housemates has largely been a lucky dip, but a new company called RooMigo is endeavouring to take some of the uncertainty out of the process by using criteria such as lifestyle choices as well as price and location to match potentially compatible housemates.

“Instead of having to read through a lot of emails trying to find the right housemate you can browse through RooMigo and get matched with like-minded people,” explains founder Ed Burke, who came up with the idea when looking for somewhere to live in Singapore. He had gone there on an Irish Government-backed initiative to study for an MBS in Asian business.

“I was working long days and there were tons of potential apartments to visit. It could have taken me weeks to find a place with the right people,” he says. “I finally found somewhere with a bunch of young entrepreneurs, but I thought it should have been possible to do this with the click of a few buttons. However, no such solution existed.

“I started building Facebook housemate communities in cities in Europe and the States and used them to test the idea which really seemed to resonate with people, particularly those in their 20s to mid-30s.

“Put simply, I realised people want to live with friends, “ Burke adds. “Our difference is that we are focusing on the people, not just the property. Later in the year we will be adding features to allow RooMigo (members) to pay their rent, utilities and bills online.”

Burke graduated with a degree in business and law from UCD in 2007 and spent time working with Treasury Holdings in Shanghai and Dublin before moving to London to work with law firm Herbert Smith Freehills. “By 2012, I had qualified as a solicitor and wanted to get back into the business world in a role other than as a legal adviser,” Burke says.

“This was proving very difficult – people only seemed to want to hire me as a lawyer – so I accepted a place on the Farmleigh Fellowship scholarship programme to do the MBS in Singapore. I subsequently got a job there and stayed until 2016 when I returned home to set up my business.” Burke took part in the New Frontiers programme at the Hartnett Enterprise Acceleration Centre at UL in 2016 and his company is now based at the NDRC.

“The idea of sharing your home is becoming a lifestyle choice for people, it’s not just an economic factor,” Burke says. “People want to be part of a community and we are putting a huge effort into creating them. RooMigo addresses the problem of the time, effort and stress people go through to find a home with the right housemates. It also tackles the massive problem of online fraud in the rental industry. RooMigo (members) can secure rooms prior to moving to a new city by paying securely over the platform without the risk of being scammed as we don’t release the money until after the person has arrived and secured their room. The online property rental industry has failed to evolve with the rapidly growing co-living and flat-share space and our solution is incredibly scalable and presents an opportunity to create a truly global Irish company.”

Burke has been working on RooMigo since the end of 2016 and has spent unquantifiable hours, a lot of his savings and about €50,000 in supports from Enterprise Ireland, the NDRC and Dublin LEO on the project so far. He is still finalising details around the revenue/charging model but it is likely that the tenant and landlord will both pay a small fee to use the service. The company will have its soft launch on the Dublin market over the next few months.