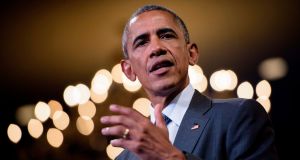 The US start-up visa programme passed during Barack Obama’s presidency of the US has been under assault since the election of President Donald Trump. Photograph: Brendan Smialowski/AFP/Getty Images

The US start-up visa, passed with much fanfare during the twilight of Barack Obama’s presidency, was supposed to draw thousands of foreign entrepreneurs. Instead, just 10 people have applied.

A big reason for the shortfall is that the year-old programme has been constantly under assault since the election of President Donald Trump, whose agenda revolves around tightening immigration rules and dismantling Obama-era policies.

The Homeland Security Department has twice delayed implementation of the programme but agreed to leave the application process open after venture capitalists won a court challenge in December. No one has been granted a visa, and Homeland Security said last year that it’s working on a plan to kill the rule entirely.

Saving the programme, which allows foreigners who secure venture funding to spend as many as five years in the US working on their businesses, is a top priority for venture capitalists.

The US National Venture Capital Association, the industry’s lobbying firm, said it’s tapping old friends now in the Trump administration and working on cultivating new ones. Michael Kratsios, a former employee of Peter Thiel who was appointed a technology adviser to the president, will join Trump policy and economic advisers at a summit in Washington DC next month organised by the VC trade group. Partners from as many as 100 venture firms are set to attend the annual conference on May 16th, where the start-up visa will be a major topic of discussion.

“We’ve been meeting with different groups within the White House during the past two weeks,” said Bobby Franklin, president of the lobbying firm. “The White House has the ultimate power over what the agencies do.”

The technology industry views immigration as existential to US innovation. Immigrants helped start Intel, Google and Tesla and account for 30 per cent of entrepreneurs in the US, according to the Ewing Marion Kauffman Foundation, which promotes entrepreneurship.

In 1996, US start-ups received more than 90 per cent of venture capital globally. By 2016, international companies sucked up almost half, according to data from research firms PitchBook and PwC. Countries looking to cultivate their own little Silicon Valleys are seizing on the US’s restrictive immigration policies as a way to lure talent.

VCs celebrated in 2016 when Obama signed the International Entrepreneur Rule into law to create the start-up visa. The H-1B, a skilled-labour visa that’s popular with tech companies, doesn’t work for entrepreneurs because it relies on an established employer for sponsorship. In July, when Homeland Security first delayed the rule’s implementation, the department predicted 2,940 people would apply for the start-up visa each year.

Despite victories last year on tax issues, including favourable treatment for stock options and carried interest, VCs have come to realise that immigration is “tough,” said Scott Kupor, chairman of the VC trade group and a managing partner at Andreessen Horowitz. To avoid getting lost in the larger debate around border security, Kupor said he tries to focus the conversation around what the Trump administration has said it wants: highly skilled workers contributing to economic growth. The debate is a test case for the political sway of the VC industry, which spent $2.2 million on lobbying during the past year, according to data compiled by Bloomberg.

Meanwhile, the 10 start-up visa applicants are left in limbo. Carter Langston, a spokesman for the US Citizenship and Immigration Services, said the agency had no timeline for resolving those applications or starting the process to rescind the rule. He suggested foreign-born entrepreneurs “consult an immigration attorney and find an alternative vehicle”.

Peter Roberts, an immigration lawyer, said he fielded inquiries from hundreds of people eager to use the start-up visa after it was first approved. With legal and application fees running as much as $5,000 and no guarantee the US will ever grant a visa under the programme, he tells clients not to bother: “It’s a waste of time and money.” – Bloomberg