Salesforce as a religion: when did tech become so silly? 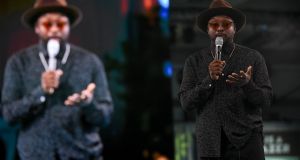 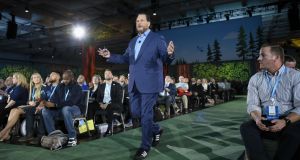 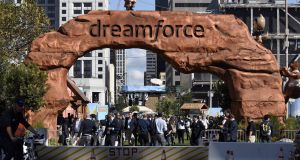 The rapid success of Salesforce in becoming the world’s leading customer relations management (CRM) services provider has been pretty phenomenal. It was established in 1999, has 25,000 staff worldwide, more than two million subscribers to its services and at $61 billion (€52 billion) is the most highly valued American cloud computing company. Now the company plans to be front and centre in what it is calling the fourth industrial revolution.

An agile business approach coupled with laser focus on its customer base through rapid delivery of new products to market have been key to its growth. The ridiculous profit margins it enjoys have allowed chief executive and cofounder Marc Benioff to join other tech industry gods, whose growing power and influence over everything has made it increasingly difficult for anyone who dares question the risks posed by untethered technological expansion to speak up.

Dreamforce 2017 wasn’t what you might describe as an understated affair. Salesforce used the event to show off just how far its come. Having almost completed construction on Salesforce Tower – the second-tallest and arguably the ugliest skyscraper west of the Mississippi river in downtown San Francisco – the company also announced a partnership with Google as its preferred cloud storage provider.

Think about this for a moment. The world’s largest search engine and the world’s largest CRM service provider will now be combining the data both have amassed on each and every one of us so that our entire online experience will be personalised to the nth degree. That is a powerful position for the new partners to find themselves in.

No wonder chief executive Marc Benioff’s keynote speech at Dreamforce had more than its fair share of grandiose and, at times, Messianic pageantry.

After being welcomed on to the stage of the massive indoor auditorium at the Moscone Center by a group of chanting Hawaiian men and women dressed in traditional ceremonial garb, the Christ-like chief executive of Salesforce walked among his disciples with his arms stretched out declaring he could “hear what was going on in our hearts and wanted to reassure his flock that he was here to love us all”.

Instead of opting for the simple white robes preferred by another well-known messiah, Jesus Christ, Benioff went for a somewhat less modest Louis Vuitton cloud-connected suit complete with the latest in Adidas footwear, also connected digitally to God knows what.

Outside the main hall, Buddhist monks offered meditation each day, while badges were handed out to attendees, giving us all the option to make public our own gender pronoun preferences. A noble gesture indeed, had the overwhelmingly white, straight and male crowd needed such tools for empowerment.

Harsh? Well maybe a little. The company is consistently outperforming its peers on hugely important social issues in tech such as equal pay for men and women, overall gender balance in the workplace, LGBTQ inclusion and a clear commitment to diversity overall. Its 1-1-1 philanthropic model – where 1 per cent of profits and 1 per cent of staff hours are given up to volunteering activities and 1 per cent of Salesforce’s products and services are provided free of charge to NGOs, charities and other nonprofit entities – has been copied by countless other major corporations.

In an interview with Bob Darby, director of information services for Barnardo’s UK (a key beneficiary of Salesforce’s 1 per cent programme), he praised the business-to-business tech provider for its unrelenting commitment to philanthropic causes. “With Salesforce, there’s never been any conversation about their corporate social responsibility strategy,” he said. “It’s built in to the DNA of the company and is addressed as part of its overall business model rather than as a mere side note.”

Appearances from Michelle Obama, Will.i.am and Ashton Kutcher, as well as live performances from Alicia Keys and Lenny Kravitz, all did wonders to distract from the snoozefest that a CRM conference would likely be for anyone with no vested interest in cloud-based sales and marketing solutions.

But of course most attendees did care about CRM. And major product announcements such as MyEinstein – a new Salesforce platform that offers point-and-click AI – was a major talking point. One got the sense that MyEinstein was being lauded as some kind of “up yours” to the fat cats on Silicon Hill, as it empowered admins and developers of any skill level to build the sales and marketing tools of the future on their own. Since when did coders become the bad guys? They just became hip, having been laughed at for their nerdy behaviour for decades. Surely they deserve a few more years in the sun before they are branded the gentiles of the tech industry.

Or maybe who cares about coders anyway? They are but the chorus line in tech’s increasingly dramatic portrayal of itself. This isn’t to suggest Salesforce isn’t an innovating, forward-thinking company doing plenty of good in the world compared with other large corporations. But the tech industry needs to pull its head out of its ass for a few moments so that it might see how silly things have become.