Leadership needs to neutralise innovation blockers – and here’s how 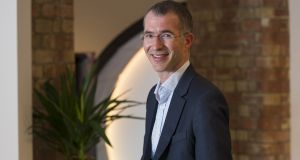 Scott Anthony’s ideas have gained traction lately and he is ranked as one of the top 10 global business thinkers in the prestigious Thinkers50 listing. Photograph: Alastair Fyfe

A frequently quoted survey by consulting firm McKinsey suggests that 94 per cent of executives are dissatisfied by their firm’s innovation efforts, despite the vast sums poured into this activity. The reason, according to one global innovation expert, is simple.

Scott Anthony, author and senior partner at consulting firm Innosight, suggests it is because they have failed to address a huge underlying obstacle: the day-to-day routines and rituals that stifle the practice of innovation.

“Innovation is on the agenda of virtually every organisation but you can’t build structures, you can’t train people, you can’t give them new strategies unless you address the fact that the day-to-day habits that they are following run counter to the behaviours that are necessary to drive innovation success,” Anthony says.

Helpfully, he has a “hack” to address this issue, outlined in some detail last month in Harvard Business Review. His ideas have gained traction lately and he has just been ranked as one of the top 10 global business thinkers in the prestigious Thinkers50 listing.

The solution to the innovation problem, he says, isn’t expensive, though it does take time and energy.

Leadership, he says, needs to identify innovation blockers and neutralise them with interventions called BEANs: behaviour enablers, artefacts and nudges.

Behaviour enablers are processes that make it easier for people to do something different. Artefacts – things that you can see and touch – support new behaviours and are likened by Anthony to connective tissue while nudges are tactics drawn from behavioural science which promote change through indirect suggestion and reinforcement.

Anthony accepts the acronym may sound gimmicky but says his team at Innosight has found it to be a simple and memorable term for organisations trying to develop better habits.

As an adviser to leaders in global companies such as P&G, Kraft, Johnson & Johnson and Cisco Systems, Anthony has the opportunity to witness what works first-hand. He has also written books on innovation including The First Mile: a launch manual for getting great ideas into the market; Seeing What’s Next: using the theories of innovation to predict industry change (with Harvard professor Clayton Christensen); and The Little Black of Innovation.

His work and research have shown that the most innovative organisations display five key behaviours, he explains. They always assume there is a better way of doing things. They focus on deeply understanding customers’ stated and unstated needs and desires. They collaborate across and beyond the organisation. They recognise that success requires experimentation, rapid iteration and frequent failure and finally, they facilitate risk-taking, challenges to the status quo and having the confidence to seek resources.

Being specific is an important component of successful innovation. “Innovation comes in many shapes so it is defined broadly as ‘something different that creates value’ but one of the common mistakes is that people think there should be no rules; we’ll take any type of innovation. The research shows that constraints and creativity are friends. Before you innovate, you should ask ‘why’, ‘what?’ and ‘where?’. If you don’t define the problem you are trying to solve, you are not going to get good answers.”

Another problem with organisations where innovation efforts fail, he says, is not that they have bad habits, it is that they have cultures in which innovation won’t thrive. “As an executive once said to us, businesses are organised to deliver predictable, reliable results and that’s exactly the problem. A major paradox managers face is that the systems that enable success with today’s model reinforce behaviours that are inconsistent with discovering what will work tomorrow,” he observes.

“Too often inertia becomes institutionalised and people become addicted to business as usual. If you don’t address that, when you try to innovate you find yourself asking people to do something that doesn’t fit their routines and you end up giving them money that is going to be squandered.”

Anthony says his team’s thinking has been influenced by a lot of research on habit breaking and cites authors such as Richard Thaler and Cass Sunstein (Nudge) Chip and Dan Heath (Switch) and Daniel Kahneman (Thinking Fast and Slow) as influencers on the science of why this is so difficult. They also drew ideas from programmes run by Weight Watchers and Alcoholics Anonymous and from the hard science of motivation which looks at how goal setting, achievement, social comparison and encouragement drive and reinforce desired behaviours.

Anthony also cites Steven Kerr’s 1995 paper On the Folly of Rewarding A, While Hoping for B, which nails a key problem:

“In our work, my colleagues and I are questioned all the time by clients as to how they give innovators in organisations the same upside that they might get in a start-up. It’s the wrong question. It is not the lack of upside that holds people back. It is the fear of punishment that will stop people from following behaviour that will drive innovation success.”

So how does this work in practice? Anthony cites two examples from his work.

“When I moved to Singapore in 2010 nobody recommended that I bank with DBS. It was known as ‘Damn Bloody Slow’ and it had the lowest customer satisfaction scores in the region. Now it is widely recognised as one of most innovative financial services firms.”

DBS introduced a range of BEANs. Initiatives included shorter meetings with specific structures in place to encourage challenges to the status quo and broader input from participants. This has saved 500,000 employees hours and scores for how people feel about collaborative nature of meetings have shot up. “Simple interventions that you do rigorously can drive behaviour change at scale,” Anthony notes.

The Indian conglomerate Tata is another. It introduced a novel award, Dare to Try, which celebrates a team that failed but in an intelligent way or as the company puts it a “novel, daring and seriously attempted idea that did not achieve the desired results”. This high-profile programme attracts hundreds of entries and encourages a culture of risk-taking in the organisation.

Too often, however, innovation initiatives are not properly grounded and fall into the category of innovation propaganda, or what Anthony terms “innoganda”.

He recalls a visit to social enterprise in Cambodia where workers were invited to contribute feedback ideas “for you, your colleagues and your wellbeing” in a bright blue box. He was initially impressed – until he discovered a rusty lock that betrayed that the box had never been opened. “Such innoganda just serves as a painful reminder of the things leadership is not doing,” he concludes.

How BEANs can drive innovation

Simplicity: Interventions that are easy to adopt and remember gain traction more quickly.

Fun: when an activity is engaging and social, its intrinsically more rewarding, which makes people more likely to sustain it, something the science of motivation has long recognised.

Trackable: the ability to monitor performance and compare it against that of others is a powerful motivator. Witness the success of Fitbit in developing better exercise habits so it is critical to include a mechanism for measuring results.

Reinforced: people often need physical and digital reminders to keep using the new habits, so development such as apps can be useful here.